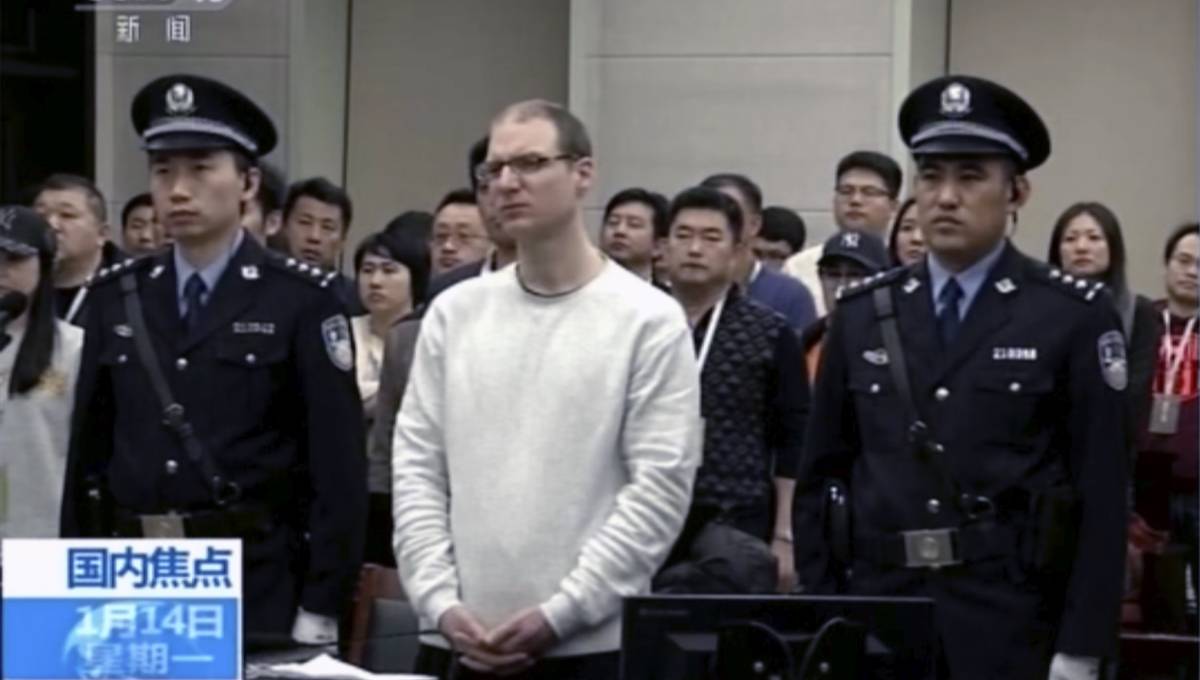 Toronto, Jan 15 : A Chinese court sentenced a Canadian man to death in a sudden retrial of a drug smuggling case and Beijing said that it has denied a Canadian diplomatic immunity, ratcheting up tensions since Canada’s arrest of a top Chinese technology executive last month.

A Chinese court in northeastern Liaoning province announced Monday that it had sentenced Robert Lloyd Schellenberg to death, reversing an earlier 2016 ruling that sentenced him to 15 years in prison.

In his strongest comments yet, Trudeau said “all countries around the world” should be concerned that Beijing is acting arbitrarily with its justice system.

“It is of extreme concern to us as a government, as it should be to all our international friends and allies, that China has chosen to begin to arbitrarily apply a death penalty,” Trudeau said.

Canada later updated its travel advisory for China urging Canadians to “exercise a high degree of caution due to the risk of arbitrary enforcement of local laws.”

Further escalating the diplomatic rift between the two countries, a Chinese spokeswoman said earlier Monday that Michael Kovrig, a former Canadian diplomat taken into custody in apparent retaliation for Meng’s arrest, was not eligible for diplomatic immunity as Trudeau has maintained.

A senior Canadian government official said Chinese officials have been questioning Kovrig about his diplomatic work in China, which is a major reason why Trudeau is asserting diplomatic immunity. The official, who was not authorized to comment publicly about the case, spoke on condition of anonymity.

Kovrig, a Northeast Asia analyst for the International Crisis Group think tank, was on a leave of absence from the Canadian government at the time of his arrest last month.

Schellenberg was detained more than four years ago and initially sentenced to 15 years in prison in 2016. But within weeks of Meng’s Dec. 1 arrest, an appeals court suddenly reversed that decision, saying the sentence was too lenient, and scheduled Monday’s retrial with just four days’ notice.

The court gave no indication that the death penalty could be commuted, but observers said Schellenberg’s fate is likely to be drawn into diplomatic negotiations over China’s demand for the release of Meng.

“Playing hostage politics, China rushes the retrial of a Canadian suspect and sentences him to death in a fairly transparent attempt to pressure Canada to free the Huawei CFO,” Human Rights Watch executive director Kenneth Roth said in a tweet.

The Chinese media began publicizing Schellenberg’s case after Canada’s detention of Meng, the daughter of Huawei’s founder, at the request of the United States, which wants her extradited to face charges that she committed fraud by misleading banks about the company’s business dealings in Iran.

Days after Meng’s arrest, Kovrig and Canadian businessman Michael Spavor were detained on vague national security allegations. Meng is out on bail in Canada awaiting extradition proceedings that begin next month.

Schellenberg’s lawyer, Zhang Dongshuo, said prosecutors had not introduced new evidence to justify a heavier sentence during the one-day trial, during which Schellenberg again maintained his innocence. He said his client now has 10 days to appeal.

“This is a very unique case,” Zhang told The Associated Press. He said the swiftness of the proceedings was unusual but declined to comment on whether it was related to Meng’s arrest.

The court said it found that Schellenberg was involved in an international drug-smuggling operation and was recruited to help smuggle more than 220 kilograms (485 pounds) of methamphetamine from a warehouse in the Chinese city of Dalian to Australia. A Chinese man convicted of involvement in the same operation was earlier given a suspended death sentence.

Fifty people, including Canadian diplomats and foreign and domestic media, attended Monday’s trial, the court said in an online statement.

Earlier Monday, Chinese Foreign Ministry spokesman Hua Chunying said authorities had determined Kovrig was not entitled to diplomatic immunity, rejecting a complaint from Trudeau that China was not respecting longstanding practices regarding immunity.

Hua told reporters that Kovrig is no longer a diplomat and entered China on an ordinary passport and business visa.

“According to the Vienna Convention of Diplomatic Relations and international law, he is not entitled to diplomatic immunity,” Hua said at a daily briefing. “I suggest that the relevant Canadian person carefully study the Vienna Convention … before commenting on the cases, or they would only expose themselves to ridicule with such specious remarks.”

A former Canadian ambassador to China, Guy Saint-Jacques, said interrogating Kovrig about his time as a diplomat in China would violate Vienna Convention protections of residual diplomatic immunity that mean a country is not allowed to question someone on the work they did when they were a diplomat.

“It’s difficult not to see a link” between the case and Canada’s arrest of Meng, Saint-Jacques said.

Canada has embarked on a campaign with allies to win the release of Kovrig and Spavor. The United States, Britain, European Union and Australia have issued statements in support. Trudeau called U.S. President Donald Trump about their case last week and the White House called the arrests “unlawful.”

Last week, Poland arrested a Huawei director and one of its own former cybersecurity experts and charged them with spying for China. The move came amid a U.S. campaign to exert pressure on its allies not to use Huawei, the world’s biggest maker of telecommunications network equipment, over data security concerns.

The arrests raised concerns over the safety of Poland’s nationals in China, although Hua brushed off such worries, emphasizing China’s desire for the “sound and steady” development of relations with Poland.

“As long as the foreign citizens in China abide by Chinese laws and regulations, they are welcomed and their safety and freedom are guaranteed,” Hua said.