Bangladeshi honoured for heroism in UAE 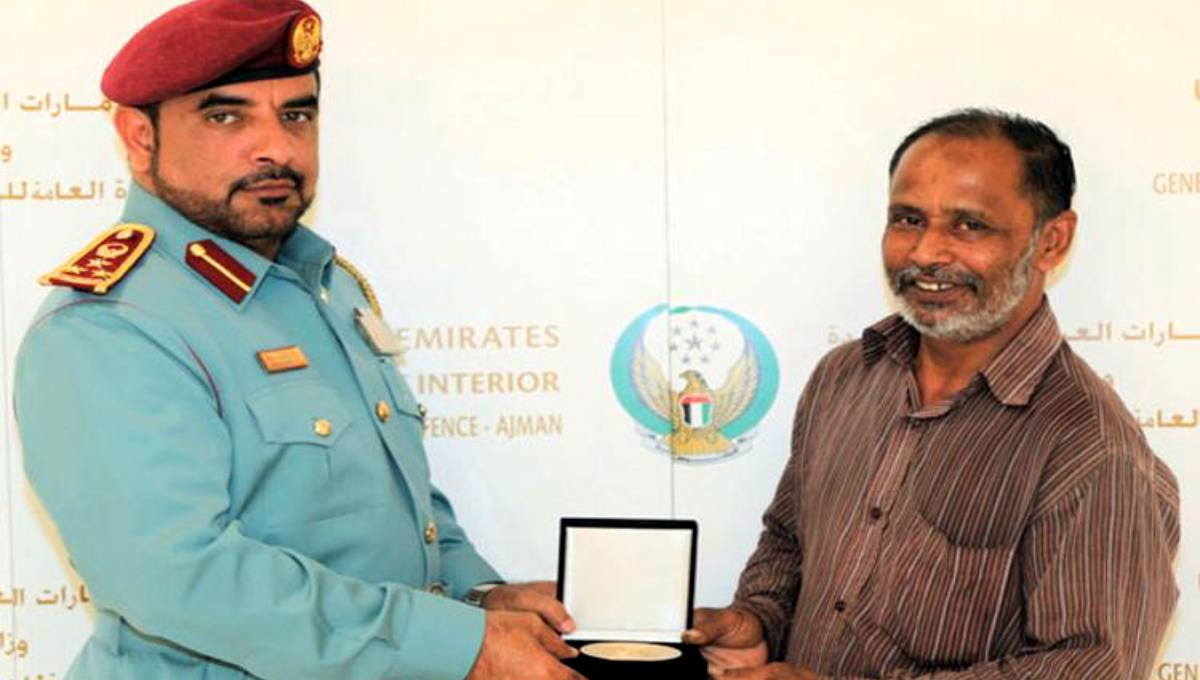 Photo: Ajman Civil Defence honoured Farouk Islam Nour Al Haq, a Bangladeshi national, for saving the life of a three-year-old boy who was flung from a burning building.

Dhaka, Jan 17 :  A Bangladeshi in Ajman was recognised by local authorities for his exemplary bravery and heroism when he rose to the challenge and saved the life of a three-year-old boy.

Bangladesh citizen Farouk Islam Nour Al Haq, 57, a welder by profession, was awarded on Tuesday by Ajman Civil Defence for his role in rescuing the boy, who was thrown off the balcony of a burning apartment on the second floor, reports local daily Khaleej Times.

When people staring at the burning building, Farouk ran to the right spot without skipping a beat, stretched out his arms, and caught the boy whose mother had thrown him out off their second-floor flat.

“Something in my mind pushed me to stand beneath the window where the woman was screaming. There was a massive crowd of people watching her but no one thought of rescuing her. Something pushed me to do anything to save this woman and her child,” Farouk told the UAE newspaper.

He was on his way to meet a friend who worked at a grocery store beside the building when he heard the woman’s desperate call for help in Hindi. He looked up and saw the mother holding his child, standing by a big window.

“I looked at her and she looked at me. I opened my arms and then she released the child who landed in my arms safely. I was shocked and I could not believe that the child had been saved until I heard the applause of the crowd chanting ‘thank God’ and clapping,” he said.

“I felt relieved and grateful. It’s like I have done something right in my life.”

When a massive fire engulfed the three-storey apartment building in Nuaimiah on Saturday night, thick, black smoke filled the flat in no time. The mother couldn’t find a way out – except through the window.

She was worried about their son who already had started to suffocate, said her husband Mohammed Saqib, who was at work when the incident happened and got a frantic call from his wife.

“My wife Rubeena said she couldn’t go through the doors and she would not survive the heavy smoke. I told her to relax and think of a way to save herself and the child,” he said.

After making sure her child was safe in the arms of a man, Rubeena jumped out of the window and landed on a car parked near the building. She sustained serious injuries and she is currently being treated at the intensive care unit of the Khalifa Hospital.

“I left everything in my hand and ran towards my car to get home as quick as possible,” Mohammed said.

“When I reached our place, my wife was already in the hospital and my son was with people. I felt relieved when I saw that my son was saved. The people told me about the man who saved my son. I thank God and thank him for the great deed that he had done to the family.”

The fire was found to have been caused by electric short circuits in the machines located in the corridor, which led to the rapid spread of thick smoke across the building.

2019-01-17
Enamul Haque Renu
Previous: Bangladesh to connect with 3rd submarine cable
Next: May wins no-confidence vote, but still is beset by Brexit