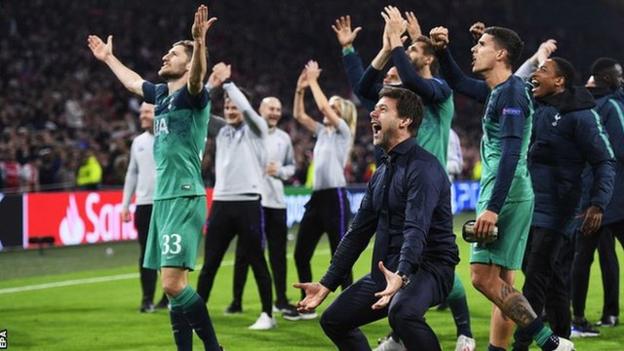 Tottenham completed a remarkable comeback to beat Ajax and set up a Champions League final against Liverpool on June 1.
Mauricio Pochettino’s side suffered a 1-0 defeat against the Dutch club last week and got off to the worst possible start in Amsterdam on Wednesday evening as Matthijs de Ligt opened the scoring in the fifth minute. Spurs looked all but out of the competition by the 35th minute as Hakim Ziyech put Ajax two in front.

But a second-half hat-trick from Lucas Moura, his third coming with virtually the last kick of the game, completed Spurs’ dramatic revival and they will now face Liverpool in Madrid at the start of June. The Brazilian sparked Spurs’ comeback after racing on to Dele Alli’s pass before dispatching a low shot past the excellent Andre Onana in Ajax’s goal.Lucas then added his second of the game four minutes later as his brilliant display of quick footwork inside Ajax’s box gave him enough space to work a shooting opportunity and he fired his shot past Onana. Spurs pushed for the winning goal but it appeared that Ajax had done just enough to win the tie. But that was until Lucas met Alli’s pass on the edge of Ajax’s area and shot low through Nicolas Tagliafico’s legs to seal Spurs’ comeback.

Tottenham midfielder Christian Eriksen said after the match: ‘It was a ridiculous game, we were really far down, we tried to fight back, we were just lucky.

‘I feel sorry for Ajax, they played a very good game against us, today we mostly created more chances, football they played better, it is relief. ‘We have been fighting for this, it is a dream to be in the final.’ Christian Eriksen added.

When the dust settles, Tottenham will look to confirm a top-four finish for the fourth successive season when they host Everton on the final day of the Premier League season on Sunday (15:00 BST).And then it’s the small matter of the Champions League final against Liverpool in Madrid on 1 June (20:00 BST).