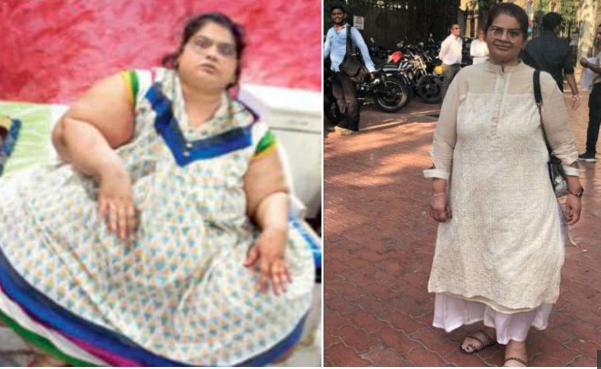 Amita Rajani, 42, is waiting to be included in the Limca Book of World Records as the heaviest Asian woman to have successfully undergone weight loss surgery. From 300 kg four years ago, she now weighs 86 kg after undergoing bariatric surgery.

A decade ago, she became bedridden due to obesity. Her trip to the hospital was the first time she stepped out of the house. “Once when I fell off the bed, it took six men and three hours to put me back up,” Amita said. A special ambulance was arranged in which a six-and-a-half-inch sofa was fitted to carry her to the hospital.

Her life took a turn for the worse when at the age of six, she started piling up on the kilos. At 16, she weighed 126 kg and found it difficult to carry out routine tasks. After she hit 300 kg, she had to be constantly assisted.“Amita required constant attention. She required the help of others to go to the washroom and do other chores which normal people can do on their own. We had lost all hope at one point,” her mother Mamta Rajani said.

Amita was shown to leading endocrinologists from India and the UK, but they were unable to find the exact cause of obesity. However, Dr Shashank Shah, a well-known bariatric surgeon from Pune, helped her battle the bulge. Shah prepared Amita for two months, thoroughly investigating her, and diagnosed her with super morbid obesity, deranged cholesterol, kidney dysfunction, type 2 diabetes and breathing problems.

“It was a high-risk case but we were optimistic. The procedure took only half-an-hour and within a few hours of the surgery, she was walking around on her own. She was determined and positive through it all,” Shah said.

In 2015, Amita underwent the first stage of metabolic surgery, a laparoscopic sleeve gastrectomy. In 2017 she underwent a gastric bypass. Shah added the case had been sent to Limca Book of World Records and was awaiting entry.