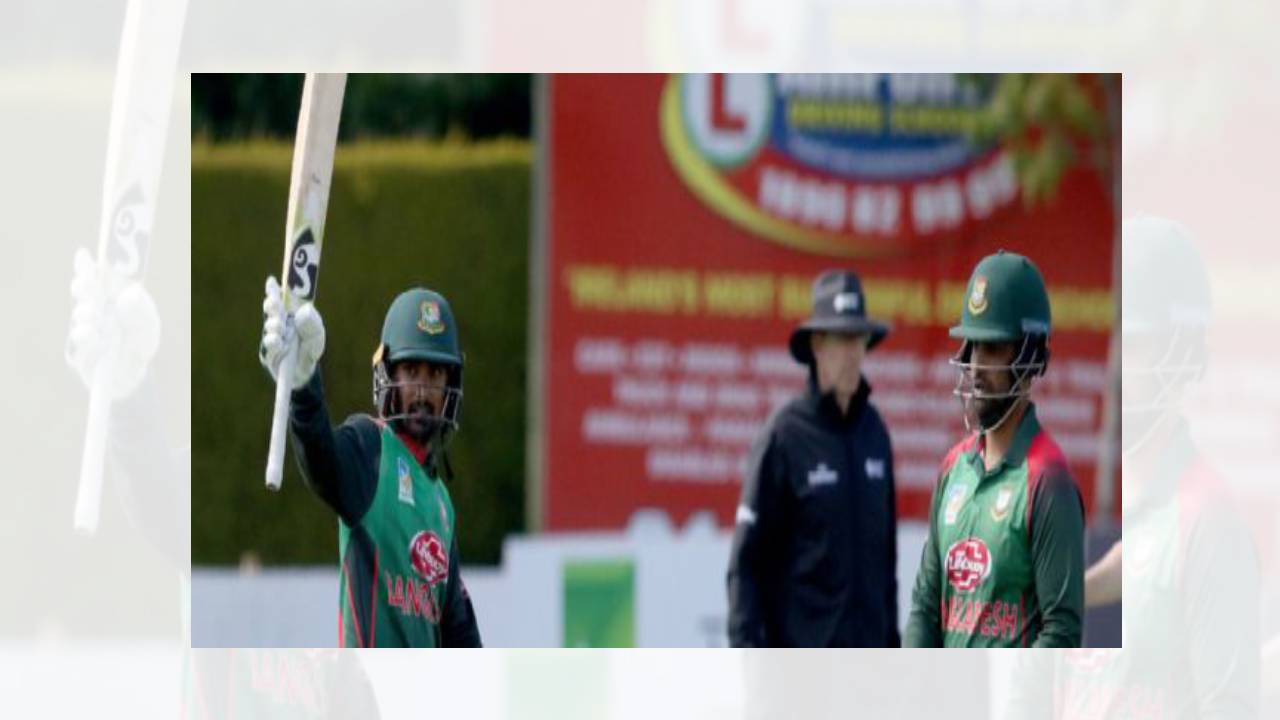 Dhaka, May 15 : Riding on the excellent bowling by Abu Jayed Rahi and confident batting by top order batsmen, Bangladesh beat hosts Ireland comprehensively by six wickets in the last group match at the Castle Avenue, Dublin on Wednesday to play the Tri-Nation Series final with an unbeaten record.

Bangladesh, which finished top in the Tri-Nation Series securing 14 points from four league matches, will play the final on Friday (May 17) against West Indies, which bagged nine points from four outings. Hosts Ireland were eliminated from the race bagging only two points from four encounters.

Ireland batted first and posted 292 for eight in 50 overs to produce a challenging target for the Tigers. Bangladesh chased it down quite comfortably with the help of Tamim Iqbal (57), Liton Das (76), Shakib Al Hasan (50 retired hurt), Mushfiqur Rahim (35), Mahmudullah (35*) and Sabbir Rahman (14*). Bangladesh scored 294 for four in 43 overs. Sabbir smashed Mark Adair for a wonderful four through long-on to finish the game.

This win meant Bangladesh remained unbeaten in the league stage games of the Tri-Nation Series which came as a huge inspiration before their assault in the World Cup in England and Wales scheduled to be played between May 30 and July 14.

While chasing, Tamim and Liton put up a solid start of 117 runs in the first wicket stand. Standing on this platform, the Tigers marched to the win with immense comfort.

Earlier, the hosts posted 292 for eight wickets. While Paul Stirling hit a ton for them, Abu Jayed registered his first five-wicket haul for the Tigers. Later, Abu Jayed was adjudged man of the match.

Ireland won the toss and decided to bat first but they failed to make an impressive start as they lost the first wicket in just 23 runs. However, they made comfortable total of 292 runs, featuring 118 runs in the 3rd wicket stand by centurion Paul Stirling and captain William Porterfield.

The hosts lost two wickets in 59 runs. However, in the third wicket stand, Stirling and Ireland captain Porterfield added 118 runs on the board, which was Ireland’s biggest partnership against Bangladesh in any wicket. They surpassed the previous highest of 92 which was made by Porterfield and Jeremy Bray back in 2007 at Bridgetown in ICC Super Eight stage of the World Cup.

Both of Stirling and Porterfield were going to strike a ton, but Porterfield fell for 94 off 106 with seven fours and two sixes. He was hunted by Abu Jayed.

After breaking the biggest stand of the innings, Abu Jayed took two wickets conceding six runs in his eighth over. First one was Kevin O’Brien. The ball was back of the length, and O’Brien tried to clear it for six but he skied the ball to Tamim Iqbal who was riding on the boundary. In the same over, Abu Jayed bagged the wicket of Paul Stirling as well.

Stirling was the best batsman for Ireland hitting 130 off 141, which was his second highest knock in ODI cricket. Along with him, Porterfield (94), Andy Balbirnie (20) also contributed with the ball.

However, the highlight of the match was Abu Jayed’s bowling. The newbie of Bangladesh’s bowling attack registered first five-for just coming to his second game. Along with him, Mohammad Saifuddin bagged two wickets, Rubel Hossain took one.

In the last group stage game came as a change for the Tigers to test their bench strength. They grabbed the opportunity bringing four changes to their previous playing XI. Liton Das came to replace Soumya Sarkar, Moasaddek Hossain got a chance in the place of Mohammad Mithun, Mohammad Saifuddin came in for Mehidy Hasan Miraz and Mustafizur Rahman was overlooked to pave the way for Rubel Hossain.

Now, if the Tigers can defeat the Caribbean boys again in the final that will be a great boost for them before heading to the World Cup.