Last days of May? UK leader in peril as Brexit offer slammed 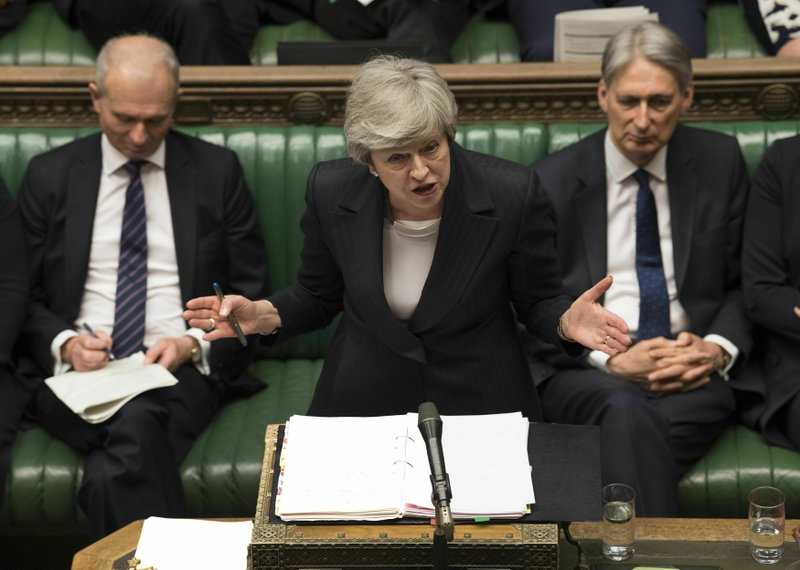 Photo: Britain’s Prime Minister Theresa May speaks during Prime Minister’s Questions in the House of Commons, London, Wednesday, May 22, 2019.


London, May 23 : British Prime Minister Theresa May dug in Wednesday against a relentless push by rivals and former allies to remove her from office as her attempts to lead Britain out of the European Union appeared to be headed for a dead end.

May resisted calls to rip up her tattered Brexit blueprint and end her embattled premiership after her attempt at compromise was rejected by both her own Conservative Party and opposition lawmakers.

But it seemed only a matter of time. Amid a feverish mood as rumors and plots swirled through Parliament, Conservative lawmakers set up a showdown meeting with May for Friday, giving her less than 48 hours to announce she will go or face a renewed attempt to oust her.

And a senior Cabinet minister quit with an excoriating letter attacking May’s failure to lead Britain out of the EU and hold her divided government together.

Leader of the House of Commons Andrea Leadsom alleged there had been “a complete breakdown of collective responsibility” in government, and said May’s Brexit plan would not “deliver on the referendum result” that saw voters in 2016 opt to leave the EU.

Leadsom campaigned to leave the EU in the referendum and was a strong pro-Brexit voice in Cabinet.

Several other senior ministers were reportedly seeking meetings with May to express unhappiness with her Brexit plan — and possibly urge her to quit. But her spokesman, James Slack, said he was “not aware of any discussions” with Cabinet colleagues.

Lawmaker Tom Tugendhat, a leading Conservative moderate, said the only chance of delivering an orderly Brexit was for May “to go — and without delay.”

“She must announce her resignation after Thursday’s European elections. And the Conservative Party must fast track the leadership process to replace her,” he wrote in the Financial Times.

In the House of Commons, May received a flurry of criticism and hostile questions as she implored lawmakers to support a bill implementing Britain’s departure from the EU that she plans to put to a vote in Parliament in June.

Nearly three years after British voters opted to leave the EU, May said “we need to see Brexit through, to honor the result of the referendum and to deliver the change the British people so clearly demanded.”

If Parliament rejected her deal, she said, “all we have before us is division and deadlock.”

That could serve as a fair summary of Britain’s current situation.

Lawmakers have already rejected May’s divorce deal with the 27 other EU countries three times, and Britain’s long-scheduled departure date of March 29 passed with the country still in the bloc.

In a last-ditch bid to secure support for her Brexit plan, May on Tuesday announced concessions including a promise to give Parliament a vote on whether to hold a new referendum on Britain’s EU membership — something she has long ruled out.

“I have compromised. Now I ask you to compromise too,” she said.

But there was little sign her plea was being heeded. Pro-EU and pro-Brexit lawmakers have only hardened their positions during months of political trench warfare, and they are in no mood to compromise.

Pro-Brexit Conservatives accused May of capitulating to pro-EU demands, and opposition Labour Party lawmakers dismissed her offer as too little, too late.

“The rhetoric may have changed but the deal has not,” said Labour leader Jeremy Corbyn. “She did not seek a compromise until after she had missed her own deadline to leave, and by the time she finally did, she had lost the authority to deliver.”

May’s authority as Conservative leader has been shredded by her loss of the party’s parliamentary majority in a 2017 election and her failure to lead Britain out of the EU as promised.

The party’s powerful anti-EU wing wants to oust May and replace her with a staunch Brexit supporter such as former foreign secretary Boris Johnson.

May has said she will announce a timetable for her departure once Parliament has voted on her Brexit bill, but it looks increasingly unlikely she can hang on that long.

May survived a no-confidence vote among Conservative lawmakers in December, leaving her safe from challenge for 12 months under party rules. Some pro-Brexit lawmakers wanted the party’s 1922 Committee, which oversees leadership contests, to change the rules when so that May can face a new challenge within days.

But the party committee decided instead to send its chairman Graham Brady to meet May on Friday before it decides whether to alter the rules.

If May stays on until next week, pressure is likely to increase when results come in from this week’s elections for the European Parliament, with Conservatives expect to receive a drubbing. Many British voters on both sides of the Brexit debate look set to use the election to the EU legislature to express displeasure over the political gridlock. Opinion polls show strong support for the single-issue Brexit Party — largely from angry former Conservative voters — and for pro-EU parties including the Liberal Democrats and the Greens.

The election is being held Thursday in Britain, but results won’t be announced until all 28 EU countries have finished voting late Sunday.

May insisted she would fight on. She said the Brexit withdrawal bill would be published Friday so that lawmakers can study it.

Despite speculation that May will scrap plans to bring it to a vote to avoid a crushing defeat, her office said a vote will be held during the week of June 3.

“In time, another prime minister will be standing at this despatch box,” May told lawmakers, acknowledging that her days in the job are numbered.

But, she told Parliament, “in the end our job in this House is to take decisions, not to duck them.

“So I will put those decisions to this House. Because that is my duty and because it is the only way that we can deliver Brexit.”