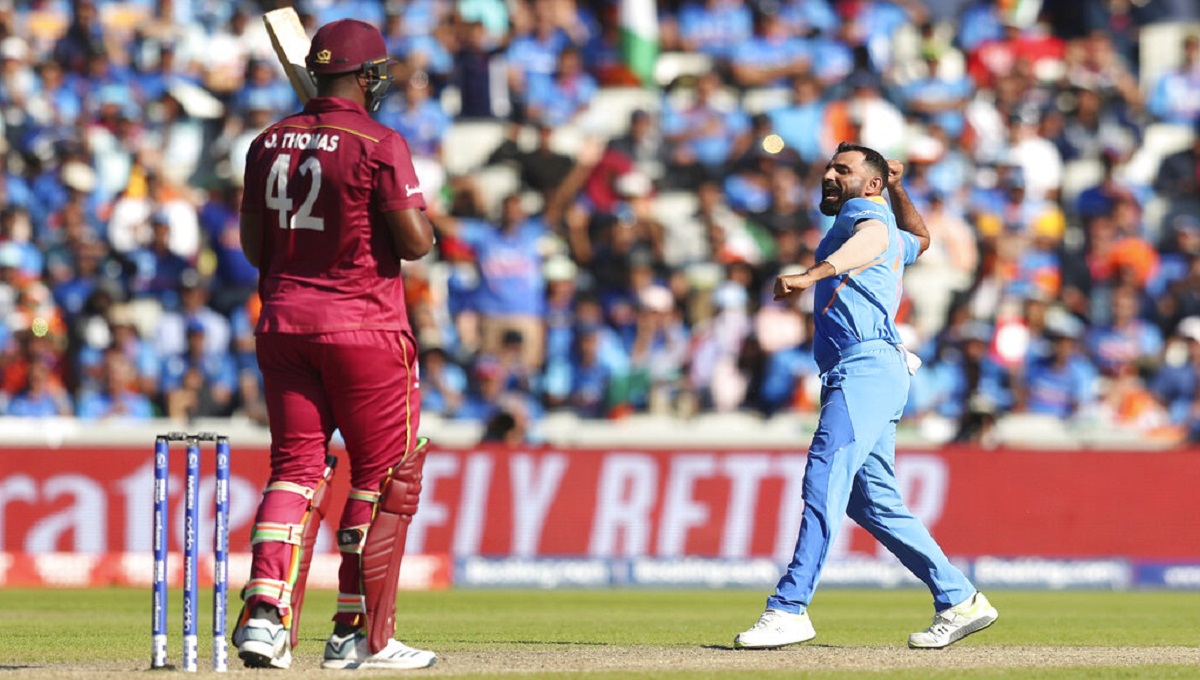 
Manchester, June 27 : Mohammed Shami only got a start at the World Cup because his India teammate Bhuvneshwar Kumar was injured.

After finishing off contrasting victories over Afghanistan and West Indies within a week, Shami may just have secured his spot.

He certainly finished off the West Indies, taking 4-16 at Old Trafford on Thursday to seal India’s 125-run win for India and end any hope the Caribbean team had of reaching the semifinals.

It was a dismal end for West Indies — dismissed for 143 in the 35th over chasing 263 to win — after a promising start to the tournament.

For India it was a fifth win from six games — one was washed out against New Zealand — and a rebound in form following a close call against Afghanistan last Saturday when it took Shami’s hat trick in the last over to seal a nervy victory.

Skipper Virat Kohli posted the highest score of the game, 72 from 82 balls, to collect a fourth consecutive half century and a man-of-the-match award.

“These haven’t been massive scoring games, but we’ve found ways of winning,” Kolhi said. “Fielders … putting bodies on the line, showing their desperation to win. The opposition feels like this team is here to win.

“A lot of self-belief in the team room right now — we feel like we can win from any situation.”

It was a fifth loss in six games for the West Indians since a commanding opening win over Pakistan, and it makes them the third team to drop out of playoffs contention along with Afghanistan and South Africa. They’ve still got games against Sri Lanka and Afghanistan to go.

India got valuable contributions from MS Dhoni, with an unbeaten 56 and a 70-run stand with Hardik Pandya (46), and KL Rahul (48) to back up Kohli.

Dhoni did get the benefit of a massive reprieve on eight, when wicketkeeper Shai Hope twice made a mess of what should have been a routine stumping, and added another 48 runs to the detriment of the West Indies bowlers. He capped his first half-century of the tournament with a pair of sixes and a boundary in India’s last over.

Where the India batsmen grafted in the conditions, the West Indian batsmen didn’t last long enough to really settle after opening bowlers Jasprit Bumrah and Shami got on top with their pace and seam movement.

Shami was India’s pace spearhead at the 2015 World Cup but slipped in the pecking order with the emergence of Bumrah and Kumar. The 28-year-old right-armer was drafted in as the new-ball bowler when Kumar injured a hamstring, and with eight wickets in two games he’ll be hard to dislodge as a new-ball bowler.

Shami dismissed Chris Gayle (6) and No. 3 Shai Hope (5) in his opening spell and, after an innings building 55-run partnership between Nicholas Pooran (28) and Sunil Ambris (31), it all went downhill for West Indies.

Pandya trapped Ambris lbw, Kuldeep Yadav had Pooran caught in the outfield and Yuzvendra Chahal dismissed Holder (6) to have West Indies reeling at 98-5.

Bumrah (2-9) returned for a one-over burst — a double-wicket maiden when he removed Carlos Brathwaite, who scored a century to get West Indies within five runs of beating New Zealand here last Saturday, and Fabian Allen on consecutive balls — to make it 107-7 in the 27th over.

That job done, Shami was given another spell. He dismissed Shimron Hetmyer, the last of the recognized batsmen, and later took out Oshane Thomas with a short ball that the No. 11 could only fend away to slip. It was all over.

India moved into second place with 11 points, one behind defending champion Australia, and travels to Birmingham to play England on Sunday. The game will be full of tension for top-ranked England, which has had back-to-back losses and needs at least one more win from its last two games to reach the semifinals.

2019-06-27
Mr. Admin
Previous: Brexit: Theresa May refuses unconditional support for next PM
Next: 4 more held in Barishal over Rifat killing