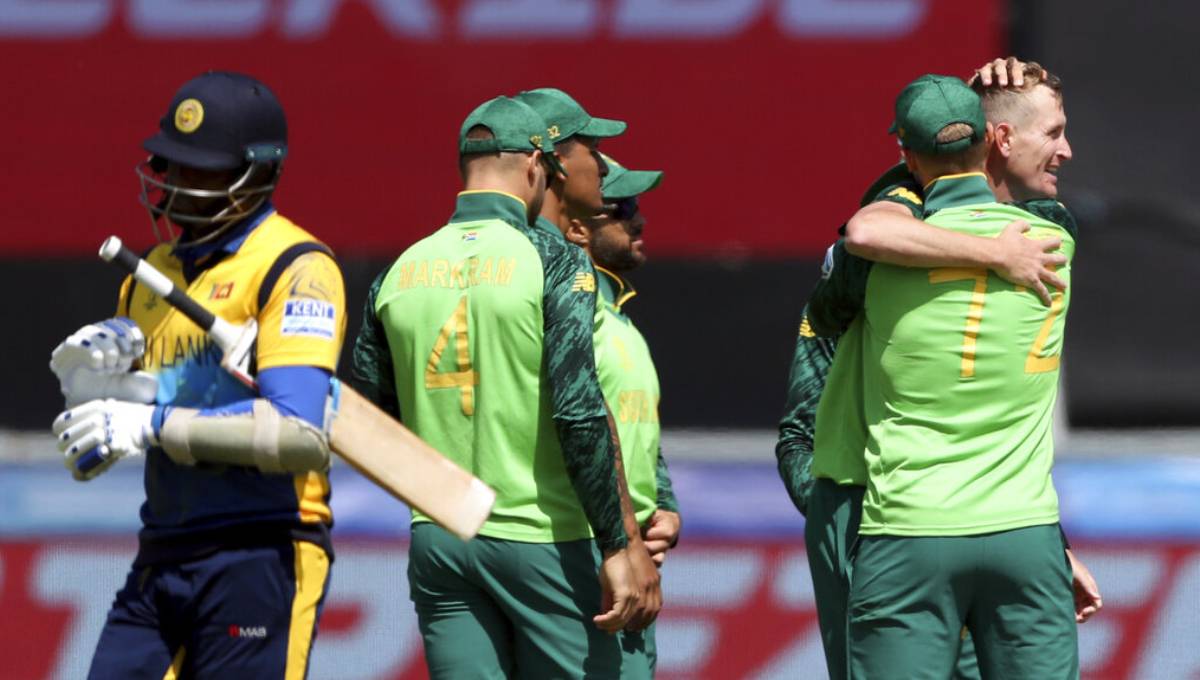 
London, June 28 : A semifinal spot seems a long way off for a Sri Lanka lineup that lost its captain on the first ball against South Africa and was dismissed for 203 at Durham.

There was potential for a sting in the tail of the innings. A swarm of insects halted the game for some minutes in the 48th over, with all the players and both umpires lying face down on the ground to avoid any problems before play continued and the last two wickets were lost for nine runs.

Sri Lanka was coming off an upset win over England that changed the momentum of the tournament but was under pressure quickly after losing the toss and being sent in to bat.

Paceman Kagiso Rabada removed Dimuth Karunaratne on the first ball with a well-directed short ball that the Sri Lanka skipper could only fend away to opposing captain du Plessis at second slip.

Sri Lanka recovered with a 67-run partnership between second-wicket pair Avishka Fernando and Kusal Perera, who both scored 30, before recalled all-rounder Dwaine Pretorius dismissed them in the 10th and 12th overs.

Chris Morris picked up the key wicket of Angelo Mathews, who scored an unbeaten 85 against England to hold the Sri Lanka innings together last week, when the allrounder dragged an attempted pull shot back onto his stumps and was out for 11.

The 30-year-old Pretorius then dismissed Kusal Mendis (23) to return the 3-25 from 10 overs — the most economical bowling figures so far at the tournament.

Sri Lanka’s bowlers successfully defended 232-9 in a 20-run win over England at Leeds a week ago, and will have to peak again with a another small total on the board.

South Africa paceman Dwaine Pretorius has taken three wickets to have Sri Lanka in trouble at 127-5 after 32 overs in the World Cup group game at Durham.

Skipper Dimuth Karunaratne was out on the first ball of the match when he tried to fend away a short ball from Kagiso Rabada.

The Sri Lankans recovered to reach 67-1 in the 10th over before Pretorius struck for the first time, having Avishka Fernando caught at mid-off after scoring 30 from 29 balls.

He bowled Kusal Perera (30) in his next over and, after Chris Morris removed the dangerous Angelo Mathews (11) he returned to dismiss Kusal Mendis (23) to have Sri Lanka in serious trouble at 111-5 in the 27th over.

West Indies allrounder Carlos Brathwaite has been fined 15% of his match fee for showing dissent at an umpire’s decision in the loss to India on Thursday in Manchester.

The incident occurred in the 42nd over of India’s innings, when Brathwaite protested a call of wide off his bowling.

He admitted the offence and accepted the sanction from match referee Chris Broad.

Brathwaite has two demerit points from the tournament. He was sanctioned for a similar offence on June 14 against England in Southampton.

After losing skipper Dimuth Karunaratne on the first ball of the match, Sri Lanka has recovered to reach 67-2 against South Africa after 10 overs of their group game.

Karunaratne tried to fend away a short ball from Kagiso Rabada and angled a looping catch to opposing captain Faf du Plessis at second slip, becoming the second player to be dismissed on the first ball of a game at this tournament. New Zealander Martin Guptill was out first ball of the match against the West Indies last week.

Avishka Fernando scored 30 from 29 balls before he was caught off Dwaine Pretorius’s bowling on the penultimate ball of the 10th over.

Kusal Perera was unbeaten on 28 after 10 overs.

South Africa skipper Faf du Plessis has won the toss and sent Sri Lanka in to bat in the Cricket World Cup group game at Durham.

Sri Lanka is still in contention for a playoff spot after its upset win over England. Nuwan Pradeep has been sidelined with an illness and has been replaced by paceman Suranga Lakmal in the only change to the Sri Lanka lineup that beat England last Friday.

South Africa is out of contention with just one win from its opening seven games and made two changes to its starting XI, with veteran JP Duminy coming in for David Miller and Dwaine Pretorius starting in place of fast bowler Lungi Ngidi.

A win would move Sri Lanka to eight points, equal with England, with games remaining against West Indies and India.

Sri Lanka is aiming to follow its upset win over No. 1-ranked England with a victory over South Africa in Durham on Friday to maintain its chance of reaching the World Cup semifinals.

Sri Lanka’s win over England was the start of a sequence of results that removed some predictability in the playoff combination and put pressure on the tournament hosts.

In head-to-head contests, the Sri Lankans have lost 16 of their last 18 one-day internationals against South Africa, including the last five, but are growing in confidence on the back of performances from veterans Lasith Malinga and Angelo Mathews.

South Africa is already out of contention after winning just one of its first seven games at the tournament.

The weather forecast for Durham is for a cloudy start, clearing to sunny in the afternoon.