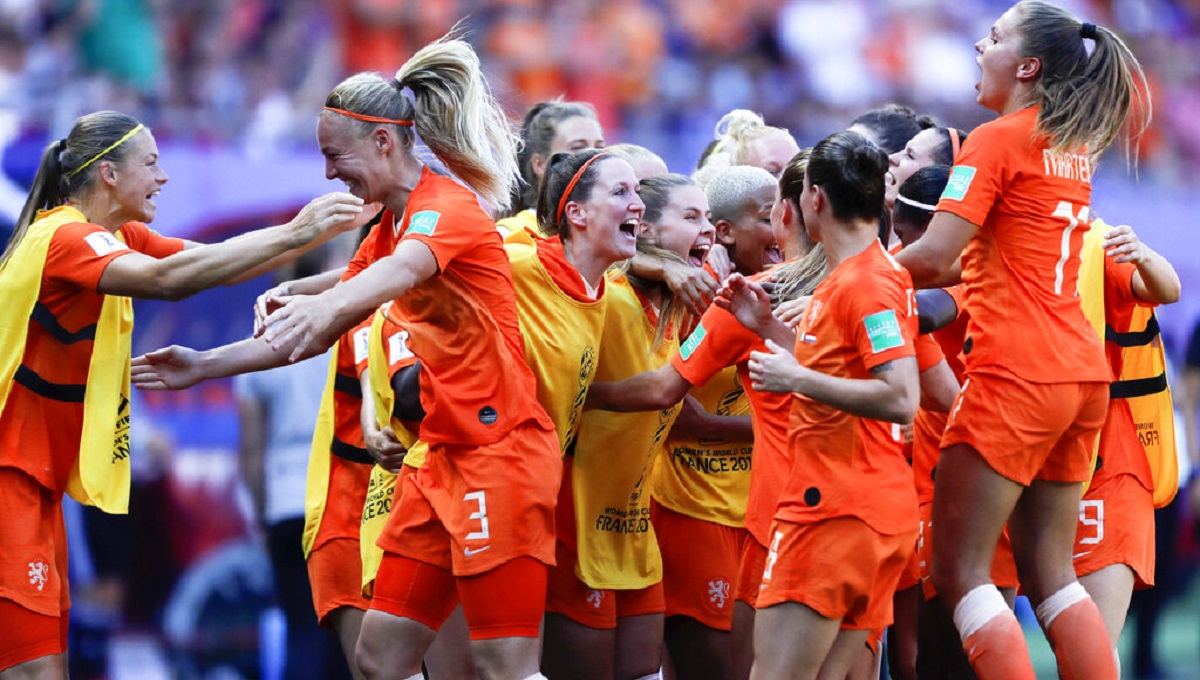 Photo : Netherlands’ players celebrate their victory after the Women’s World Cup quarterfinal soccer match between Italy and the Netherlands, at the Stade du Hainaut stadium in Valenciennes, France, Saturday, June 29, 2019.


Valenciennes, June 29 : The Oranje procession will roll into a Women’s World Cup semifinal for the first time.

The parade of fans, covered head to toe in orange, the brass band — and, of course, the free kick specialists on the field.

In the sweltering afternoon heat of northeast France, the Netherlands relied on a pair of headers off free kicks by Sherida Spitse to beat Italy 2-0 in a quarterfinal game Saturday.

Vivianne Miedema scored off Spitse’s delivery from the left side in the 70th minute to claim her 61st goal in 80 appearances for the Netherlands.

“In the end, people expect me to score goals,” Miedema said. “That header, I had a good feeling.”

So did Stefanie van der Gragt 10 minutes later, powering in a towering header when Spitse swung in a free kick from the right.

“I had the strength to get the ball in the right place,” Spitse said. “Our football, we could also play a little bit more and could score goals but it’s nice to score from set pieces as well.”

Six of the last eight goals have come from set pieces at this World Cup, only the second time the Dutch women have appeared in the tournament. Four years ago, they only made it to the round of 16 but laid the foundations to win the European Championship in 2017.

“I didn’t expect to be in the semifinals of this World Cup,” Miedema said. “We’ve been complaining that we’re not playing the best football but in the end we’re in the semis. We’ve done amazing and we can be really proud.”

The Netherlands will play Germany or Sweden in the semifinals Wednesday in Lyon, a day after England plays the United States in the same stadium.

Expect an influx of thousands of Dutch fans to central France, just as they have painted towns orange across a tournament that has struggled to attract crowds.

“It’s unbelievable, they really help us,” Netherlands coach Sarina Wiegman said. “It’s very special and it’s not something you get used to.”

The Dutch are getting used to a lot of new things in recent years.

With a place among the top three European teams at this World Cup now secured, the Dutch have claimed a spot in the Olympics for the first time. They will be going to the 2020 Tokyo Games with England, which organizes the British team. Germany or Sweden will take the other spot.

The women’s team is flying the flag for Dutch soccer in international competitions, with the men failing to even qualify for the 2016 European Championship or 2018 World Cup.

Italy was surprised by how far it got after missing out on the last four Women’s World Cups. The team made the quarterfinals at the inaugural edition in 1991 and was knocked out in the group stage in 1999.

“The women’s game has been discovered and appreciated back home, so it’s a big deal,” Italy coach Milena Bertolini said. “I believe the girls have a greater confidence and awareness of what great players they are.

“They need to be proud of themselves. The way they played and approached matches and their passion, they’ve shown people back home that football can be a sport where you have enjoyment, helping one another, unity and all these values. I think that’s why the public have fallen in love with this team.”

Now Bertolini wants clubs in Italy, where all but one member of the squad plays, to turn their players into full-time professionals to help them compete better on the international stage.

“Our girls are amateurs and we came up against a fully professional side today,” Bertolini said. “It makes you a bit miffed.”

Miedema plays for newly crowned English champion Arsenal and was voted women’s player of the year in England in April. The other scorer, Van der Gragt, plays for Spanish champion Barcelona.

“That is why my players have done something extraordinary,” Bertolini said through a translator. “Thanks to the team spirt they have been able to reduce the gap. The clubs and the ruling classes now need to do something to give them the same conditions as their foreign counterparts.”