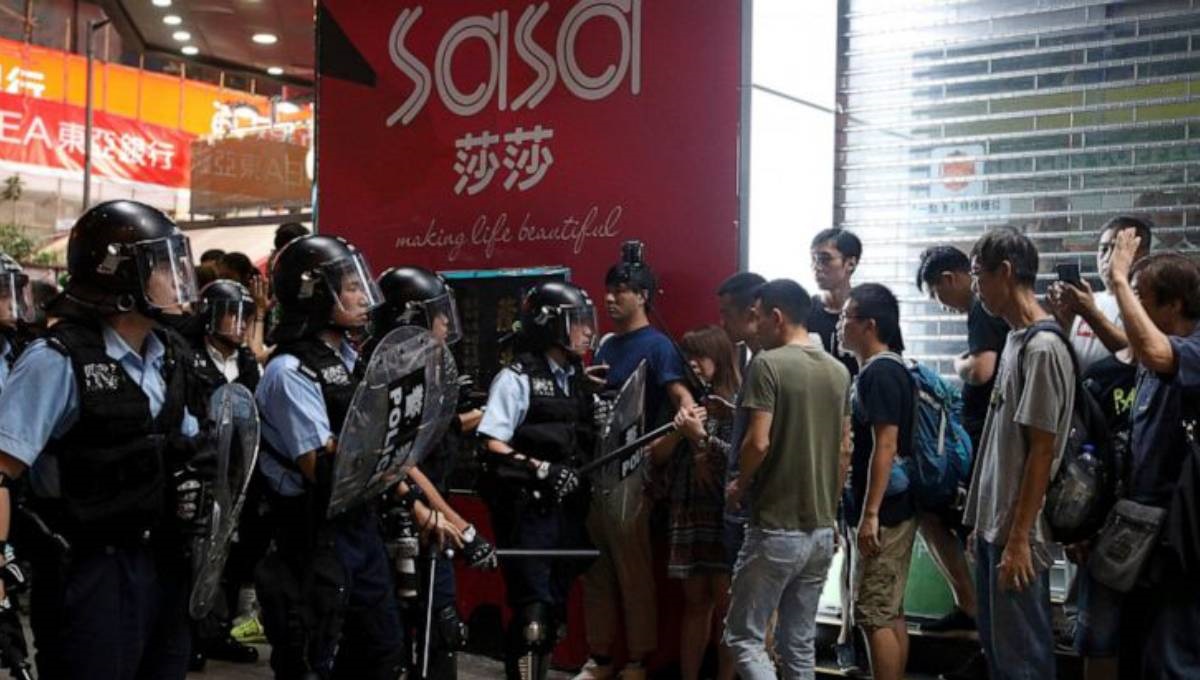 Hong Kong, Jul 13 : It’s still the world’s “freest” economy, one of the biggest global financial centers and a scenic haven for tycoons and tourists, but the waves of protests rocking Hong Kong are exposing strains unlikely to dissipate as communist-ruled Beijing’s influence grows.

The end of the former British colony’s 50-year grace period after China took control in 1997 is years away, and the protests have made only a minor dent in day-to-day business. But they point to issues clouding the outlook, as investors and residents fret that the city will lose its Western-style freedoms.

Many in Hong Kong believe their future hinges on keeping the civil liberties, independent courts and other advantages Beijing promised to preserve for at least a half-century after Britain ceded control under an arrangement dubbed “one-country, two systems.”

“We’re still talking about 28 years,” says Grant Strudwick, vice president for Asia for Pinkerton, which provides risk management services. “The spotlight is on China as to how they treat this transition period.”

Hong Kong’s economy once was about a fifth the size of China’s. Now, it’s a tiny fraction of that, thanks in no small part to an industrial boom driven by Hong Kong tycoons who set up factories across the border after China opened to outside investment in the 1970s.

The territory’s success as a center for trade and investment is grounded in its independent legal system and the free flow of information, said Joseph Cheng, a political analyst and leader of a pro-democracy coalition, the Alliance for True Democracy.

“These are two important assets enabling Hong Kong to have a distinct edge over major coastal cities in China, like Shanghai, like Shenzhen,” he said.

He believes that, without further moves toward democracy, Hong Kong will likely become more unstable.

Confidence in the “one country, two systems” experiment was already feeble when the top local leader, Chief Executive Carrie Lam, put forward legislation that would allow authorities to send suspects held in Hong Kong to face trial in mainland Chinese courts that provide no assurances of independent judges, due process and other Western legal protections.

As tens and sometimes hundreds of thousands of Hong Kong residents took to the streets in protests and business groups and foreign governments registered their concerns, Lam suspended the proposed legislation. Pro-democracy activists have pressed on with the protests, demanding she permanently withdraw the bill, order an independent inquiry into heavy-handed police tactics and resign.

On Tuesday, Lam insisted that the extradition bill was “dead.” Hong Kong’s government also issued a statement saying it doesn’t plan to implement the “social credit” system used in the mainland to penalize and reward behavior measured using various technologies including data processing and facial recognition that critics have described as Orwellian.

Most of the demonstrations have been peaceful, though some have turned violent. Protesters vandalized the local legislative building earlier this month. Such sights might deter some investors, but they also show the city is a world apart from the rest of China, where public dissent is banned.

The protests are “part of the checks and balances in place in Hong Kong that support institutional strength,” the ratings agency Moody’s said in a recent update.

The conservative think tank Heritage Foundation has ranked Hong Kong the “freest economy” for 25 straight years. The city is the No. 3 financial center, according to an international survey of bankers, behind New York and London. It plays a pivotal role in financing for China and was the top location for initial public offerings in 2018, with nearly $37 billion raised.

As small as it is relative to China as a whole, Hong Kong retains an outsized strategic role for Beijing, says Ken Courtis, chairman of Starfort Investment Holdings.

If trade tensions between the U.S. and China worsen further, leading Washington to curb financial activities of mainland companies in American markets, Hong Kong’s role for launching IPOs could grow further, he notes.

For now, it’s Hong Kong’s proximity to China, and its special status, that make it such an important location for businesses, analysts say.

Strudwick said Beijing’s efforts to build a “Greater Bay area” encompassing Hong Kong and other parts of the manufacturing-heavy Pearl River Delta are helping to integrate the territory more closely with neighbors such as Guangzhou and Shenzhen. That might help revitalize its economy, which expanded at an anemic 0.6% annual rate in the last quarter, battered by slowing demand and trade tensions.

While unemployment is low, bread-and-butter issues such as how to afford to live in a city with the world’s priciest real estate are adding to frustrations.

Salaries come nowhere close to matching the territory’s per capita GDP of nearly $50,000 a year — a reflection of the vast disparities in wealth between those living in villas on Victoria Peak and the majority occupying tiny apartments that sell for about $24,000 per square meter.

“Everything has changed. I am not talking about democracy, it seems no matter how hard you work, your life remains hard. In the past, you could afford an apartment if you worked hard,” said a laundry shop worker who like many protest supporters gave only her first name, Lisa. “This is a huge difference.”

For a country like China whose leaders often boast of a 3,000-plus year history, 50 years is only a snippet of time. For Hong Kong residents taking to the streets in protest, it’s the better part of a lifetime.

“It’s how the social strata and those freedoms are managed that is going to be the focus of future potential protest activity and unrest and uncertainty,” Strudwick said. “It’s still going to be a major global city into the future. It’s a case of understanding the risks and knowing what you’re getting into come that 2047 time frame.”