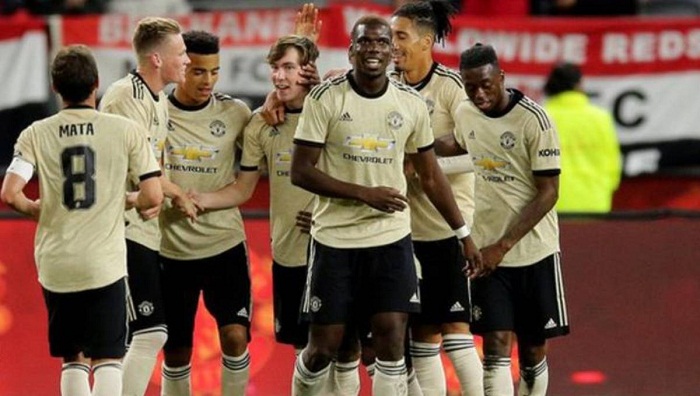 Manchester United’s £89m record signing Paul Pogba said there was “no need” to talk after helping Ole Gunnar Solskjaer’s side start their pre-season campaign with a 2-0 win against Perth Glory, reports BBC.
Second-half goals from Marcus Rashford and James Garner proved decisive at the Optus Stadium.

Pogba provided the assist for Rashford in his first game since stating a desire to leave Old Trafford, a view that has been reinforced twice since by his adviser Mino Raiola.The midfielder declined to speak to reporters after the game, saying there was “no need” to do so.

Real Madrid and Juventus are both interested in the 26-year-old, although neither club has made a bid. United are understood to value Pogba at over £150m.

Pogba was overlooked for the captaincy in Perth as Juan Mata wore the armband after half-time, although Solskjaer said the France midfielder would be considered for the role this season.

“I don’t think that needs explaining, we will discuss that later on,” said Solskjaer, when asked why he was thinking about Pogba for the role.

Romelu Lukaku is the second high-profile player facing an uncertain future at United.The Belgian missed Saturday’s game with a “minor niggle”, according to Solskjaer, who expects him to be fit for Wednesday’s encounter with Championship outfit Leeds, who will arrive in Perth on Sunday.

That possibility appears to have moved a step closer after Inter said Icardi was returning to Milan from their training camp in Lugano. He will not be considered for the club’s tour of Asia, which includes a game against United in Singapore on 20 July.

Lukaku told journalists “you guys will know something next week” when he was asked about his future after the game.

As with Pogba, Solskjaer said his club had not received any bids for the £75m forward, adding “let’s see when the season starts” when asked if he could see Lukaku staying at Old Trafford beyond the 8 August transfer deadline.

Solskjaer praised both men afterwards, even if Wales international James had little opportunity to show the electric pace that persuaded United to pay Swansea £15m for him.

Because England Under-21s’ Wan-Bissaka was operating further back, the £45m former Crystal Palace full-back was at least able to make a greater impression.

Solskjaer does want to make further additions, although he refused to give any further details.

“You need to speak to Ed [Woodward, executive vice-chairman] or others,” he said.

“We are working, as I said before. Timing is an issue but we are optimistic.”

England to back Buttler, but Denly in the firing line

Famed India cricket stadium to be used for coronavirus quarantine

Real Madrid in sight of title after beating Alaves