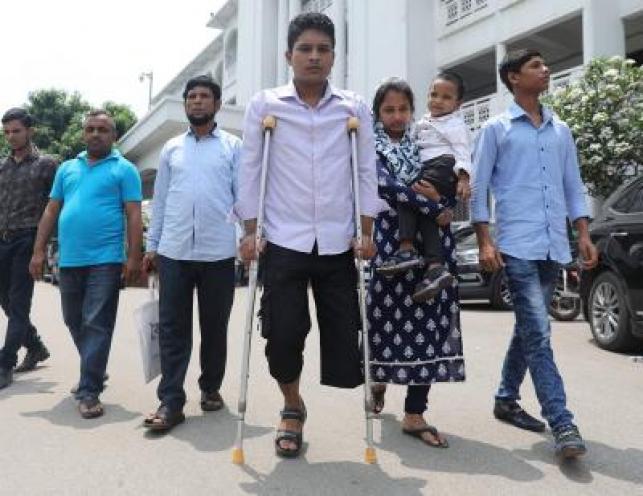 Dhaka, July 21 : The High Court has given Green Line Paribahan until July 28 to pay Tk five lakh to Russell Sarkar, who lost his leg after being hit by a bus of the company on Dhaka’s Mayor Mohammad Hanif Flyover in April last year.
The court passed the order after Green Line Paribahan’s lawyer Advocate Shah Monjurul Haque prayed for time for complying with its directive on Sunday.

The HC bench of Justice FRM Nazmul Ahasan and Justice KM Kamrul Kader fixed July 28 for passing further order on this issue.Russel from Palashbari, Gaibandha was on the wheels of a microbus of a rent a car service when it was hit from the rear by Green Line bus when he came down from the microbus and demanded to why the Green Line bus driver hit his vehicle when altercations ensued between the two and at one point the Green Line bus sped away knocking Russel down when his left leg was smashed.

Russel’s left leg had to be amputated from above his knee, making it necessary for him to get an artificial limb.

On March 12, the High Court directed the Green Line Paribahan to pay by March 31 Tk 50 lakh to Russel Sarker.

Earlier, in a ruling, the High Court on May 14, 2018 asked Green Line to explain why it would not be directed to pay Tk one crore to Russel as compensation.