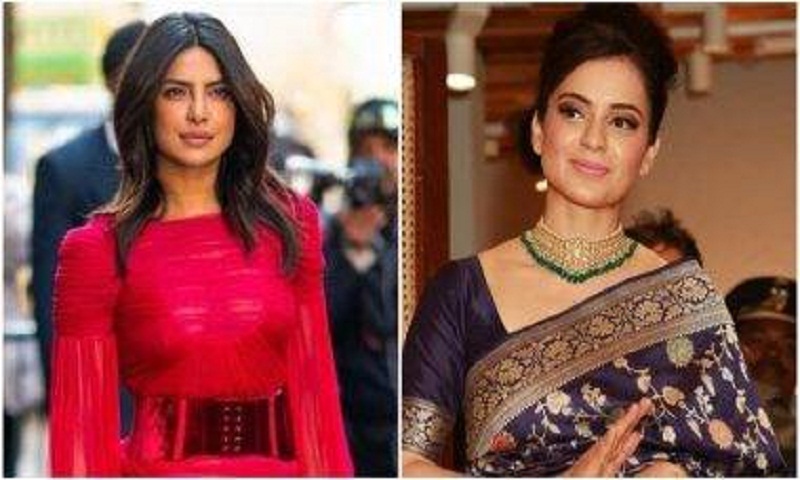 Actor Priyanka Chopra, who is at the centre of a controversy with the Pakistani government requesting the UN to remove her as the Goodwill Ambassador for UNICEF, has found support in her Bollywood colleague Kangana Ranaut. The issue snowballed when a Pakistani woman questioned Priyanka about her ‘Jai Hind’ tweet after India responded to Pulwama attack with strikes in Pakistan-occupied Kashmir.
“It’s not an easy choice to make… when you are stuck between your duty and your emotions, being a UNICEF goodwill ambassador sure you can’t limit your identity to one nation, but how many of us choose heart over mind every day,” Kangana said in a statement.

Priyanka found herself dragged into the controversy at a Beautycon event in Los Angeles. A Pakistani woman called out the Baywatch star for her tweet, claiming that the actor was encouraging war between the two countries.

During the Beautycon event, Ayesha called Priyanka’s stand “hypocritical”, adding, “As a Goodwill Ambassador, you are encouraging nuclear war against Pakistan. People like me have supported you in your business.” She was referring to Priyanka’s tweet praising Indian Air Force after the February 2019 strike against a terrorist camp in Balakot, Pakistan.

A calm and composed Priyanka had then reacted saying, “War is not something I’m really fond of but I am patriotic, so I’m sorry if I hurt sentiments to people who do love me and have loved me. But I think that all of us have a, sort of, middle ground that we all have to walk. Just like you probably do as well. The way that you came at me right now… girl, don’t yell. We’re all here for love.”

As the video from the event went viral, Priyanka was praised by many for her ‘gracious’ response while others labelled her a ‘hypocrite’ for refusing to answer the question.

Earlier this week, Pakistan human rights minister Shireen Mazari wrote a letter to the UNICEF demanding Priyanka’s removal as Goodwill Ambassador over the Kashmir issue, and also citing her “jingoism and support” for the Indian government’s action in Kashmir, reports Hindustan Times.In a letter to UNICEF Executive Director Henrietta Fore, Mazari said Priyanka’s “support for war, including a nuclear war, undermines the credibility of the UN position to which she has been elevated. Unless she is removed immediately, the very idea of a Goodwill Ambassador for Peace becomes a mockery globally.”