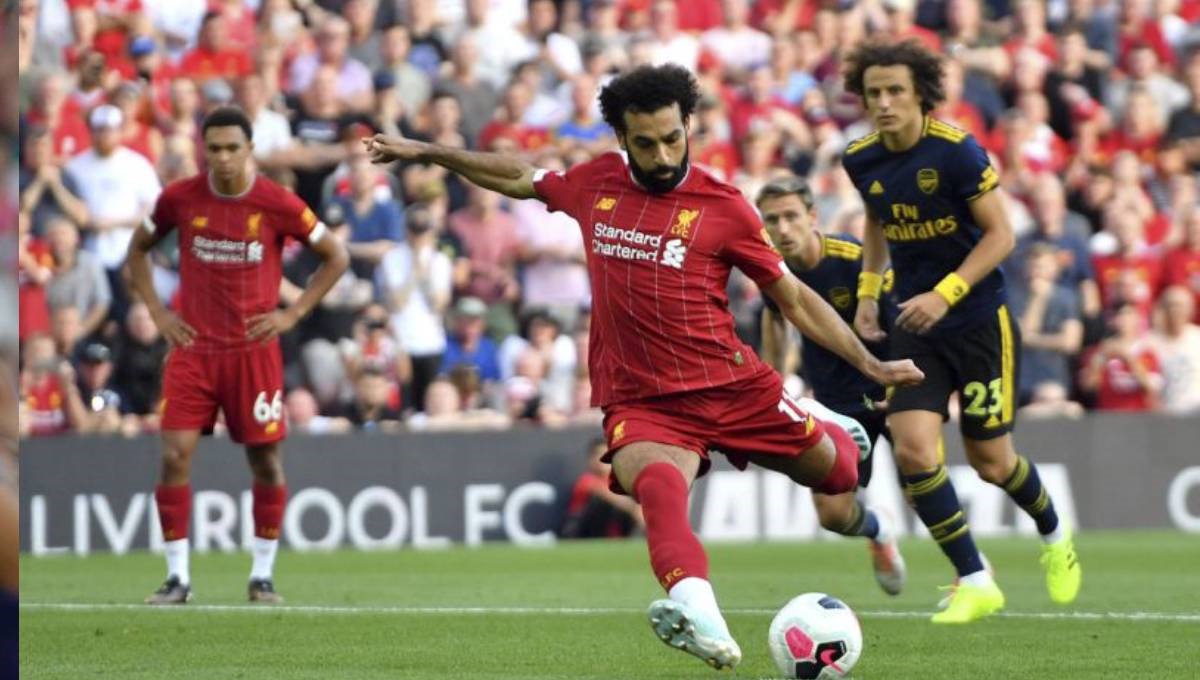 Liverpool, Aug 25 : Mohamed Salah converted a penalty before scoring a sublime solo goal as Liverpool beat Arsenal 3-1 to open up a three-point gap at the top of the Premier League on Saturday.

Liverpool hadn’t found its best form in opening wins over Norwich and Southampton, and faced the only other top-flight team with a 100 percent record.

It proved to be a mismatch.

After Joel Matip’s first league goal in 11 months broke the deadlock just before halftime, Salah converted a penalty after being fouled by David Luiz and then made it 3-0 by turning Luiz near halfway, sprinting down the right wing and cutting in to deliver a finish into the bottom corner.

Substitute Lucas Torreira scored a consolation for Arsenal five minutes from the end.

Liverpool will end the third round of games as the only team with nine points from a possible nine.

The game started at a frenetic pace, with the hosts setting a high tempo that penned Arsenal back in the final third. Within 80 seconds, Andy Robertson whipped a ball across the six-yard area which Roberto Firmino narrowly missed.

Arsenal manager Unai Emery’s tactics were to defend deep with eight men behind the ball in an attempt to draw the opponent in before trying to release the explosive pace of offseason signing Nicolas Pepe, given a full debut at the expense of Alexandre Lacazette.

Pepe had three chances in the first half, while Liverpool goalkeeper Adrian — fresh from the error that cost his team a goal at Southampton last week — came out of his area to clear the ball only to find Pierre-Emerick Aubameyang, who lobbed the ball back just past the far post.

Pepe’s best chance came when Jordan Henderson’s mistake on the halfway line allowed the Ivory Coast international to run past Robertson but, in a one-on-one situation with Adrian, he shot straight at the goalkeeper.

Soon, incessant pressure on Arsenal’s defense began to tell and after Salah held off Granit Xhaka to cleverly turn and fire wide, the breakthrough came.

From a corner, Trent Alexander-Arnold finally found his range and Matip benefited from the space created by Virgil van Dijk’s tangle with Matteo Guendouzi to power home a 41st-minute header.

Sadio Mane should have done better with his header in injury time but if the interval was a period for Arsenal’s players to clear their heads, no one told Luiz who, in a moment of madness four minutes after the break, tugged on Salah’s shirt.

The Egypt international confidently dispatched the penalty and added a second by brilliantly putting the seal on a three-pass move which eliminated most of the opposition.

Started by Adrian and including Alexander-Arnold, the ball came to Fabinho who flicked forward an inviting ball allowing Salah to skip past Luiz with embarrassing ease 40 yards out. He ran into the penalty area before placing a shot inside the far post with his left foot.

It was then an exercise in damage limitation for the visitors, with Emery’s first change being to send on combative midfielder Torreira for playmaker Ivan Ceballos.

Lacazette, scorer of 19 goals last season and one in one match this season, was not introduced until the 81st minute — and even then it was Torreira who eventually found the net, drilling home a loose ball 15 yards out.