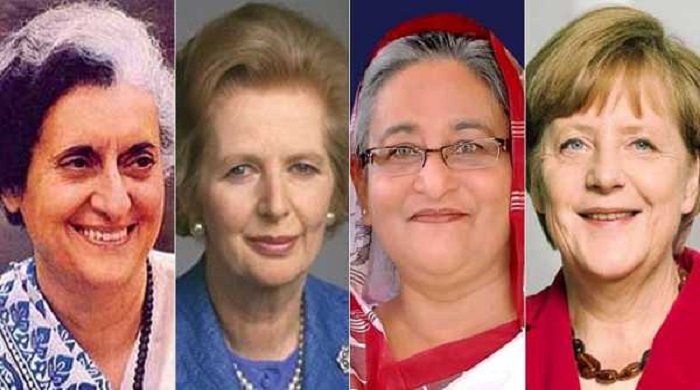 The name of Prime Minister Sheikh Hasina has been placed in the list of longest serving eminent female leaders of the world.
Sheikh Hasina has exceeded the records of famed female heads of governments including Indira Gandhi of India, Margaret Thatcher of Britain and Chandrika Kumaratunga of Sri Lanka.

Sheikh Hasina is now an icon of resurrection of women, a recent survey by WikiLeaks says. Dame Pearlette Louisy, Governor General of Saint Lucia, is the longest serving female head of the state.She stayed in power from September 11, 1997 till December 31, 2017. That is to say, she ruled the country for 20 years and 105 days. But, she is not very famous in global politics. Vigdis Finnbogadottir of Iceland remained the head of the state from August 1, 1980 till August 1, 1996. She was also not a familiar name on the global stage.

German Chancellor Angela Merkel is on the top of female heads of states in the world. Assuming power on November 22, 2005, she is still running Germany.Sheikh Hasina is now performing the duty of Prime Minister of Bangladesh for the fourth time, including thrice at a straight, reports United News of India.

At first, she became the Prime Minister from 1996 till 2001 and then she came back to power in 2008. In a national election held on December 30, 2018, her party obtained maximum seats in Parliament.

She took oath as the Prime Minister for three consecutive years, on January 7, 2019. She has already completed 15 years as the Prime Minister and now, she is into one year of her fourth term. Sheikh Hasina is the only head of the government, who crossed the records of Margaret Thatcher of Britain.

Thatcher ruled Britain for 11 years and 208 days from May 4, 1979 till November 28, 1990.Indira Gandhi was the Prime Minister of India for over 15 years, at different times.Chandrika Kumarantunga of Sri Lanka performed duties as both the Prime Minister and the President for 11 years and seven days.Four female longest serving heads of states and governments are well known in the world. These women, including Indira Gandhi, Margaret Thatcher, Angela Merkel and Sheikh Hasina, gave a new direction and new possibilities to their respective countries.

After assuming power for the fourth time, Ms Hasina has crossed the records of other famous female world leaders.Bangladesh has achieved a great deal of socio-economic advancement during last several years under the leadership of Prime Minister Sheikh Hasina. Per capita income of Bangladeshi people has mounted to 1900 dollars which was below one thousand dollars a few years back.

Bangladesh has successfully graduated from the least developed countries (LDC) during the tenure of Prime Minister Sheikh Hasina. Bangladesh’s first satellite Bangabandhu 1 was launched into space in 2018 which is another breakthrough of Sheikh Hasina’s government.

Digital technologies have reached the doorstep of people all over the country as a result of the government’s Digital Bangladesh initiative. Sheikh Hasina is now making the best of her efforts to transform Bangladesh into a prosperous country by implementing Vision 2021 and Vision 2041.

Bangladesh has become a development role model in the present world. All countries now view Bangladesh as a brilliant example. Different international organizations have awarded prestigious prizes to Sheikh Hasina recognizing the dexterity with which she has been serving Bangladesh.