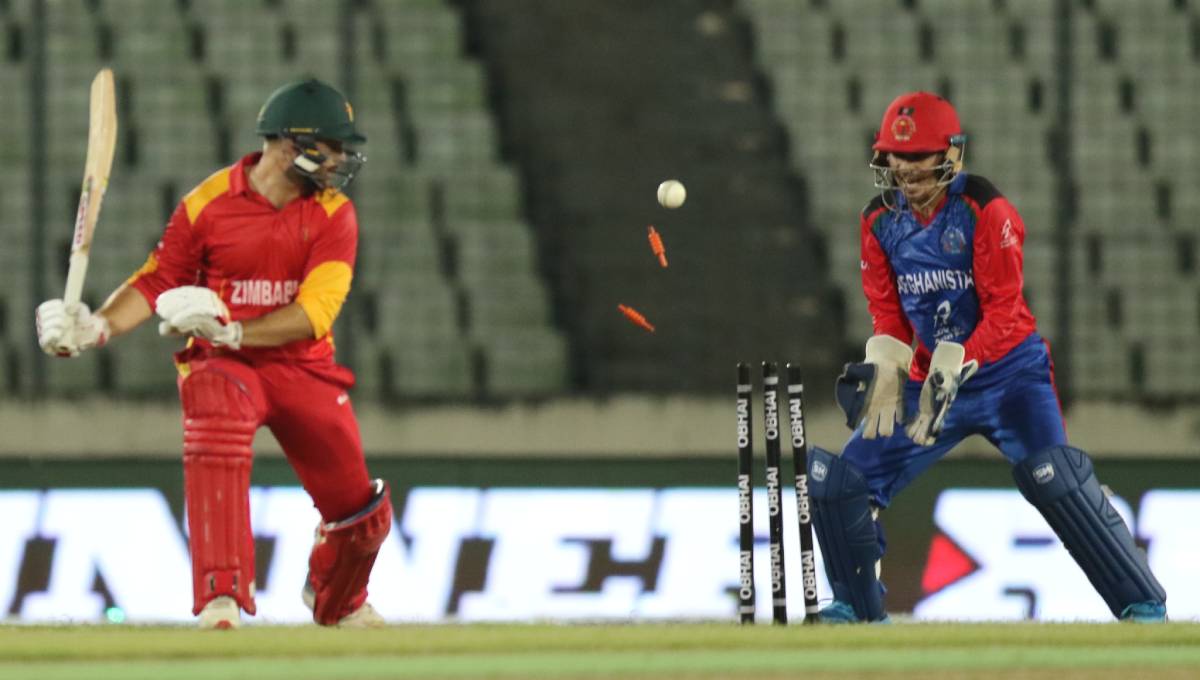 Dhaka, Sept 14 : In their first game of the ongoing Tri-series T20, Afghanistan beat Zimbabwe by 28 runs on Saturday at Sher-e-Bangla National Cricket Stadium.

Zimbabwe won the toss and opted to bowl first. Afghanistan took the advantage of batting first setting a massive target of 198 runs for Zimbabwe riding on the 22-ball fifty of Najibullah Zadran.

While replying, Zimbabwe scored 25 in 2.4 overs, but in the next eight balls, they lost three wickets- Hamilton Masakadza (3), Brendan Taylor (27) and Sean Williams (0). Two of these three wickets were taken by left-arm medium-pacer Fareed Malik.

Coming to bat at number seven, Regis Chakabva posted an unbeaten 42 off 22 with three fours and two sixes, and remained the highest run scorer for his team.

Zimbabwe eventually ended on 169 for seven in 20 overs and lost the game by 28 runs.

For Afghanistan, Fareed Malik and Rashid Khan bagged two wickets each while Karim Janat and Gulbadin Naib took one wicket each.

Earlier, riding on the explosive fifty by Najibullah Zardan (69 off 30), high flying Afghanistan posted a massive 197 for 5 in 20 overs.

Despite some slow batting during the middle overs, Afghanistan ended on 197 for five featuring 107 runs off just 41 balls in the fifth wicket stand by Mohammad Nabi and Najibullah Zadran, the 2nd fastest partnership in the history of T20Is.

During the innings, Afghanistan hit 15 sixes which is the record of the highest number of sixes in T20Is at Sher-e-Bangla National Cricket Stadium in Mirpur.

Afghanistan kicked off their innings with some powerful batting display. They reached fifty off just 31 deliveries riding on the super batting show by Rahmanullah Gurbaz. He helped Afghanistan score 58 at the end of the powerplay hitting 42 off 22 balls with five fours and two sixes.

In the last over of the powerplay, Rahmanullah lost his opening partner Hazratullah Zazai for 13 off 14. Zazai was looking unsettled from the start of the innings. Zazai fell prey to Tendai Chatara while driving a delivery outside off-stumps to the cover but he lofted it and Sean Williams took a high-catch.

After a fiery 43 off 24, Gurbaz was removed by Williams. At the end of 10th over, Afghanistan were 75 for two. Within next four overs, Rashid Khan-led Afghans lost Najeeb Tarakai and Asghar Afghan.

Both of them were well settled in the middle, but disappointed to carry on for a big knock. While Taraki fell for 14 off 19, Asghar hit 14 off 16. Taraki was removed by seasoned campaigner Williams and Ainsley Ndlovu, the debutant, scalped Asghar.

During the 17th and 18th over, Mohammad Nabi and Najibullah Zadran jointly hit seven sixes in a row. Nabi hit Chatara for four sixes in the last four of 17 over while Najibullah hit Neville Madziva for three consecutive maximums.

Along the way, Najibullah completed his fifty off only 22 balls with three fours and five sixes. He ended on 69 off 30 balls with five fours and six sixes. Nabi got dismissed in the last ball of the innings off Chatara for 38 off 18 balls.

For Zimbabwe, Chatara and Williams took two wickets each while Ainsley took one wicket on his debut.

Afghanistan will face Bangladesh in their next game on Sunday while Zimbabwe will face hosts on September 18 at the Zahur Ahmed Chowdhury Stadium, Chattogram.