Nabi and Mujeeb the stars in record win for visitors 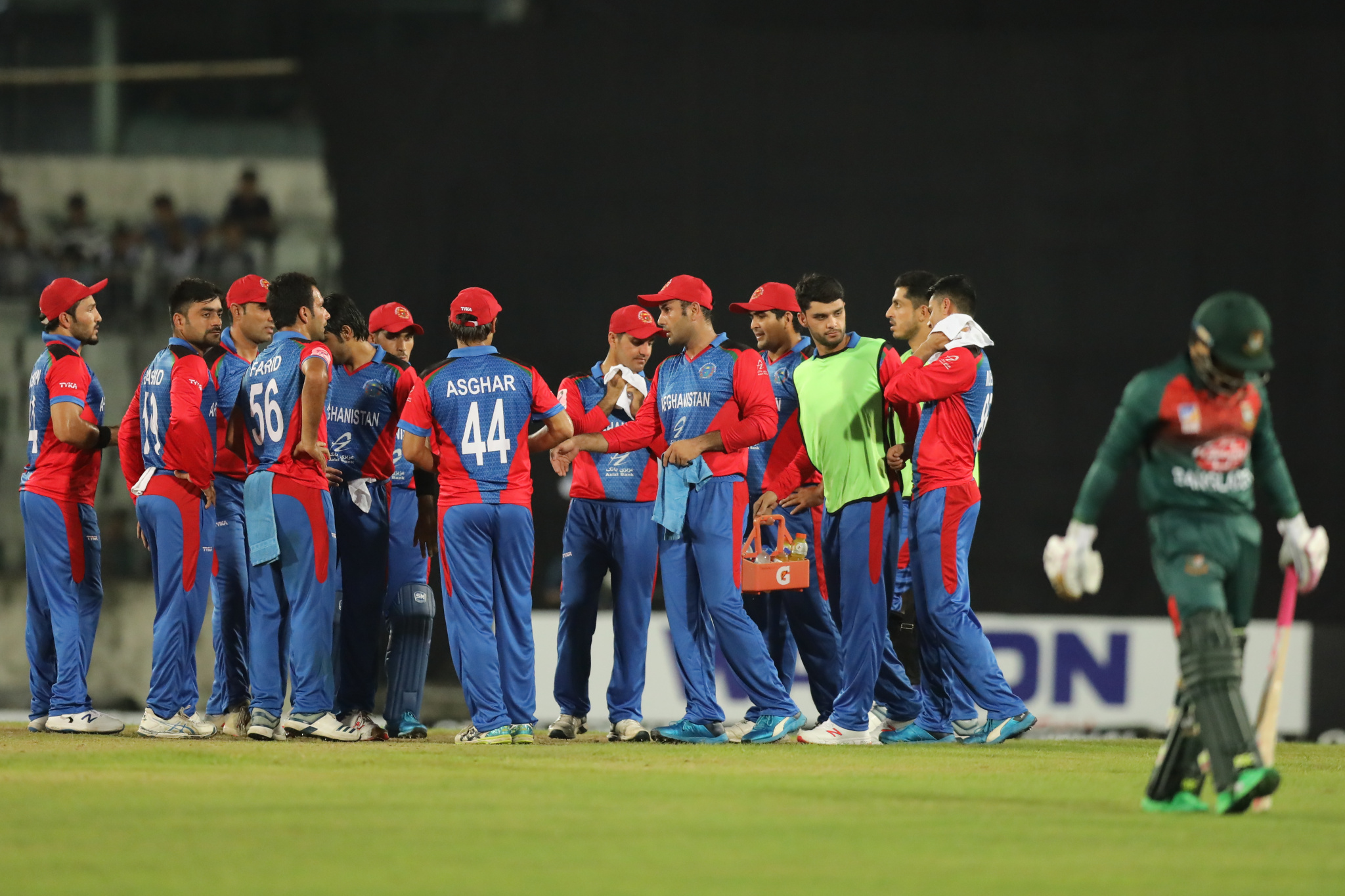 Dhaka, Sept 15 : Afghanistan continued their astonishing winning streak in T20Is as they won their 12th game in a row in the format – a record – beating hapless Bangladesh by 25 runs in the Tri-Nation T20 Series at Sher-e-Bangla National Cricket Stadium in Mirpur, on the back of superb batting by Mohammad Nabi and mesmerising bowling by Mujeeb Ur Rahman.

With this win, Afghanistan secured the top spot in the table at the end of the first round robin, with everyone having played each other once, by winning both of their matches. It would be hard to bet against them not ending the tournament on top at this stage, given the quality cricket they are playing.

Nabi scored an unbeaten 85 off 54 to propel Afghanistan to 164 for six in their 20 overs, despite losing a wicket off the first ball of their innings and slipping to 4/40 at one stage, after Rashid Khan won the toss for the Afghans and chose to bat first. In reply, Bangladesh fell down for 139 all-out in 19.5 overs as Mujeeb, the teenage legspinner, bamboozled the Tigers in his 4-over spell, finishing with the magnificent figures of 4/15.

Bangladesh began their chase with Liton Das bewilderingly partnered by Mushfiqur Rahim to open the innings. But Liton fell for just two in the first over bowled by Mujeeb Ur Rahman. Bangladesh lost three more wickets in the Powerplay, and handed the initiative to Afghanistan, who never let it go from there on.

Mushfiqur failed to make an impact as he fell for five off three. After suffering a golden duck in the first game, Mushfiqur fell cheaply again, meaning the most reliable batsman of Bangladesh is going through a really bad patch now.

Shakib Al Hasan and Mahmudullah Riyad added 20 runs in the third wicket stand but they failed to continue on a positive manner as Shakib fell for 15, looking spooked by Mujeeb as he struggled to get him away before lofting an easy catch taken by his opposite number at mid-on. Right after that, Soumya Sarkar suffered a golden duck, and Bangladesh were now reeling at 4/32.

Bangladesh’s biggest partnership came in the fifth wicket stand when Mahmudullah and Sabbir Rahman added 58 runs but that was not enough to avoid a defeat.

Sabbir fell for 24 and Afif Hossain, who hit a fifty in the last game, scored 16 this time. Eventually, the Tigers tumbled for 139 all-out in 19.5 overs and lost the game after Mustafizur Rahman hit three boundaries in the last over.

For Afghanistan, Mujeeb bagged four for 15 while Nabi and Rashid Khan bagged two wickets each.

Earlier, a tremendous Mohammad Nabi propelled Afghanistan to a challenging total of 164 for six in 20 overs. The veteran all-rounder remained unbeaten on 85 off 54 with three fours and seven big sixes. For Bangladesh, Mohammad Saifuddin bagged four for 33– his career-best bowling figures.

Afghanistan won the toss and opted to bat first, but failed to manage an expected start as they lost Rahmanullah Gurbaz in the very first ball of the match off Saifuddin who shattered his stumps with an astonishing outswinger. Rahmanullah completely missed the line and lost his stumps.

In the next over, Shakib came in and removed the other opener, Hazratullah Zazai, for one. Zazai tried to clear Shakib through deep mid-wicket area where Liton Das took a high catch.

Afghanistan continued to stutter as they lost the third wicket in third over when Saifuddin took his second wicket of Najeeb Tarakai for 11. This time, Sabbir took a brilliant catch at the boundary rope.

Two overs later, Shakib struck again in the sixth over to remove Najibullah Zadran who smashed 69 off 30 balls against Zimbabwe on Saturday night. It was an arm-ball from Shakib and Najibullah hit through the mid-off but managed to sky the ball only. Soumya Sarkar picked up a regulation catch to complete his removal. At the end of the powerplay, Afghanistan scored 41 four wickets.

Bangladesh were close to getting the fifth wicket when Afghanistan were 93 at the start of 15th over. But Taijul Islam overstepped to concede a no-ball and a watchful catch at deep went in vain.

Afghanistan added 79 runs in the fifth wicket stand shared by the experienced-duo — Asghar Afghan and Mohammad Nabi. The partnership was broken when Saifuddin removed Asghar for 40 off 37. In the same over, Saifuddin picked up Gulbadin Naib as well.

Despite losing some quick wickets, Afghanistan ended on 164 for six in 20 overs riding on several mighty blows off Nabi.

For Bangladesh, Saifuddin bagged four wickets for 33 runs, which is now his best bowling display in the shorter format of the international game. Shakib took the remaining two wickets.

Bangladesh will play their next game on September 18 at Zahur Ahmed Chowdhury Stadium in Chattogram while Afghanistan will take on Zimbabwe at the same venue on September 20.