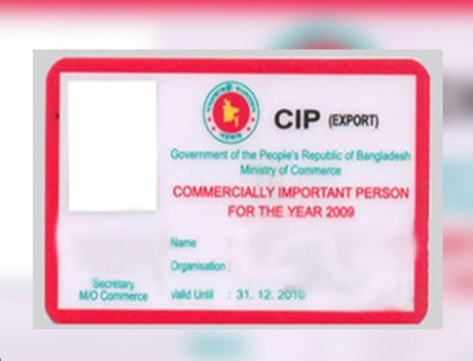 The government has awarded the Commercially Important Person (CIP) cards to 182 businessmen for their extraordinary performance in export in 2017.
Commerce Minister Tipu Munshi and Chairman of the Parliamentary Standing Committee on the Commerce Ministry Tofail Ahmed handed over the CIP cards among the awardees at a function held at the Hotel Intercontinental in the city today.

Out of the 182 businessmen, 136 received the status for their outstanding performance in export of different products while 46 got the status under the ex-officio category of different business chambers and trade bodies.Speaking at the function, Tipu Munshi said the number of CIP card holders is increasing every year as the volume of the country’s export is going up day by day. “We give the recognition to the businessmen for encouraging them. We are selecting the CIP card receivers as per the standard of the products and volume of the export. We hope that the number of CIP card holders will increase in the next year,” he added.

Tofail underscored the need for diversification of export products for increasing the volume of export.