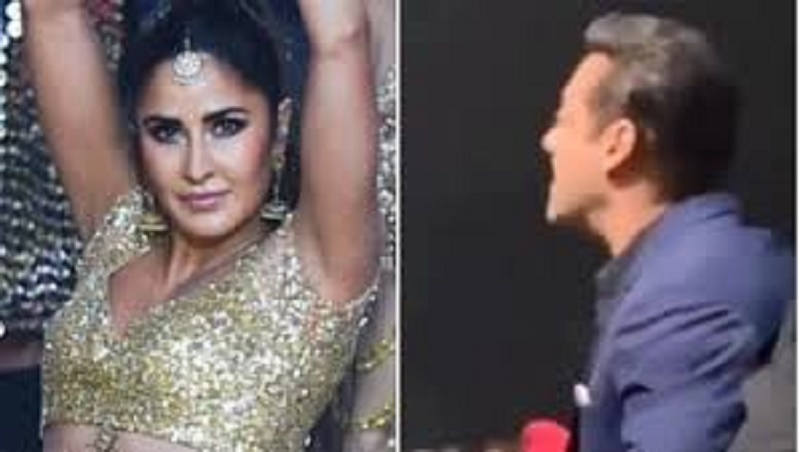 In a video that has been shared by online fan accounts, actor Salman Khan can be seen leaping with joy when his frequent co-star Katrina Kaif is announced on stage at the recent IIFA Awards. The annual awards were held in Mumbai on Wednesday, with some of the biggest stars in attendance.
The video, shared on Instagram, shows Salman jumping up at the mention of Katrina. “Presenting the very charming, gorgeous and extremely talented Katrina Kaif!” a presenter, perhaps host Ayushmann Khurrana, is heard saying off screen. Salman immediately gets up from his chair, pumps his fist in the air, and cheers her on.

Katrina and Salman’s fans seem to be very happy with their chemistry. The video has received thousands of views already. “Omg soooo cuteeee..ths Being Salman..always there for my fav Katrina,” one fan wrote in the comments. “OMG that’s so sweet,” wrote another.Salman and Katrina were rumoured to have dated in the past, and drifted apart for a number of years before coming together to work in Ek Tha Tiger. Since then, they’ve worked together in the action film’s sequel, Tiger Zinda Hai, and Bharat.

At the recent Hindustan Times Mint Asia Leadership Summit in Singapore, Katrina spoke about her bond with Salman. She said, “Salman has really had my back, and has been there for me as a friend and a support over the years, unfailingly and intuitively. There have been moments where I was going through a particularly rough time in my life; a struggle, and with no contact, all of a sudden, our paths would just cross, and he would be there.”