‘Bangladesh is a stable, humanitarian state with responsible leadership 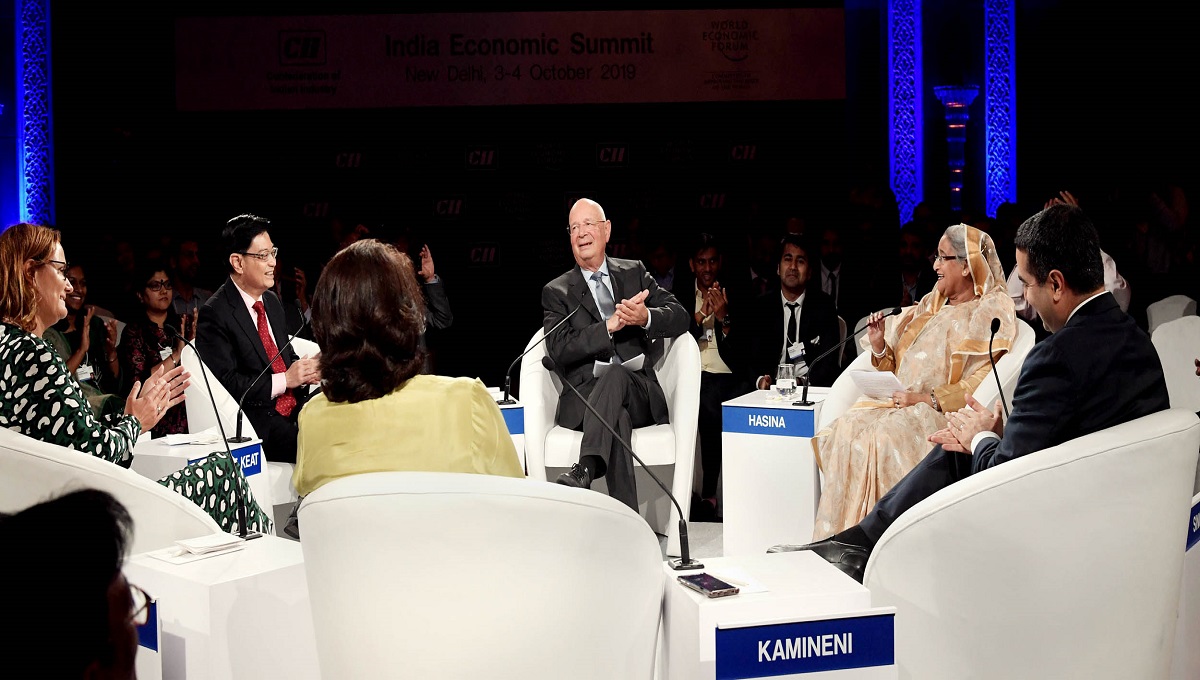 “That’s coupled with sound macro-economic fundamentals – and our pragmatic and open economy shall continue to set global trends and the example of a peaceful and progressive nation,” she wrote in her latest article on Bangladesh.

In her article shared by the World Economic Forum (WEF) on Friday, Prime Minister Hasina described how and why “Bangladesh is booming” mentioning that they are continuously learning in their journey towards development with its confident people, able leadership and governance.

In between Eastern and North-East India, China on the west and South-East Asia, Bangladesh merits the attention of global and Indian business as a seamless economic space.

“Beyond our own 162 million people, Bangladesh can be the connecting landmass to a combined market of nearly 3 billion people,” Hasina mentioned.

Last year, HSBC predicted that Bangladesh would be the 26th-largest economy in the world by 2030.

Hasina said many see Bangladesh as a ‘market’ of over 30 million middle- and affluent-class people and a ‘development miracle’.

“To me, our strengths are the societal values and peoples’ trust in Bangladesh,” she said.

Equally, the Prime Minister said, people’s aspiration to progress and their resilience as well as their confidence in our leadership.

“My father, the Father of our Nation Bangabandhu Sheikh Mujibur Rahman, dreamt of a Sonar Bangla, an exploitation-free and just society. His vision gives us the confidence to move with our vision to advance Bangladesh as a developing country by 2021 and a developed country by 2041,” Hasina mentioned.

She said Bangladesh is quickly moving to a high-value, knowledge-intensive society, beyond apparel manufacturing.

“Last year, we exported 12 industrial robots to Korea. Four ships made in Bangladesh have come to India,” Hasina said.

Recently, Reliance purchased a large quantity of refrigerators made in Bangladesh. Bangladesh also has 600,000 IT freelancers – the largest freelancing community.

“This all speaks to a quiet transformation where people have taken risks and faced challenges by becoming more innovative and adopting technology,” she said.

The Prime Minister said Bangladesh is urbanising fast and by 2030, 48 percent of its population will live in towns and cities.

“Most will be young, energetic and digitally connected. They will be agile, receptive to new ideas and look for new ways of creating wealth,” she said.

In fact, Hasina said, this is already happening with over 110 million active internet subscribers in Bangladesh.

By 2025, mobile internet penetration will reach 41 percent population, said the Prime Minister adding that rapid urbanisation, fed by increasing consumption of electricity and more than 30 million middle-class citizens, is indeed a huge market.

The Prime Minister said some are concerned about the risks of investing in Bangladesh. “Yes, we have challenges like many other countries. But, in Bangladesh we know how to transform challenges into opportunities.”

She said Bangladesh is close to achieving double-digit growth and since 2009, Bangladesh’s economy has grown by 188 percent in size. “Our per-capita income has surpassed $1,909.”

In transforming the country into a “Digital Bangladesh’ since 2009, the government has ensured 100 percent ICT access for people at the grassroots, she said.

“Twelve of the zones are already functioning. Two zones are reserved for Indian investors. A number of high-tech parks are also ready for technology and innovative enterprises,” she said.

Two houses of coronavirus suspects under lockdown in Cumilla