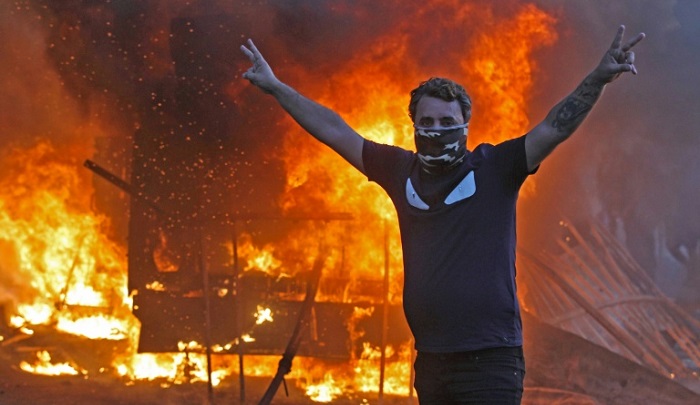 Clashes intensified Friday across Iraq as protesters swarmed streets and clashed with police in an uptick in violence that has left 44 dead including six security forces in the past four days.
Security forces said “unidentified snipers” had killed four people including two police in Baghdad, and AFP journalists reported hearing rapid automatic rifle fire across the capital in what appeared to be the most chaotic day of protests yet.

Earlier on Friday, Iraq’s Shiite spiritual leader Grand Ayatollah Ali Sistani urged authorities to heed the demands of demonstrators, warning the protests could escalate unless immediate and clear steps are taken.Sistani, who is revered among Iraq’s Shiite majority, appeared to pile new pressure on Prime Minister Adel Abdel Mahdi as he battles to quell the unrest.

In his first speech since protests began Tuesday, the premier appealed for patience from the young unemployed who have formed the mainstay of the protests, saying his not yet year-old government needs more time to implement reforms.

But despite his plea, a curfew and an internet blackout, Iraqis thronged the iconic Tahrir Square on Friday and clashed with the anti-riot police, AFP reporters said.

Security forces opened up with a barrage of gunfire and reporters said they saw several people hit by bullets, some in the head and the stomach.

“We’re not infiltrators,” protesters in the capital shouted, responding to accusations from Iraqi officials that “aggressors” were behind the protests.

Bullets whizzed through streets aimed at crowds of protesters whose numbers bulged as more trucks arrived.Demonstrator Sayyed told AFP the protests would continue “until the government falls”.

Sistani urged the government to take “clear and practical steps” and act now “before it’s too late” to address popular grievances.

After his sermon, parliament announced that it would dedicate Saturday’s session “to examining the demands of the protesters”.

Protests first broke out in Baghdad on Tuesday and have since spread across the Shiite-dominated south.

They are unusual because of their apparent spontaneity and independence in a country where rallies are typically called by politicians or religious figures.

At least 44 people, including six police have been killed — 10 on Friday alone — with hundreds wounded in four days, medical and security sources said.

Medical sources say that most of those killed were hit by live rounds but do not specify who was shooting.

In the southern city of Diwaniyah, where two people were killed on Friday, AFP reporters said protesters had breached the main gate at the governor’s compound and were headed towards the main building.

“There are attacks on peaceful protesters and security forces which we reject and condemn,” he said.

Sistani’s message is a huge blow to Abdel Mahdi’s government. The top cleric has repeatedly acted as final arbiter of the politics of Iraq’s Shiite community, which dominates the government.

On Friday, Adel Mahdi asked for more time to implement his reform agenda in a country plagued by corruption and unemployment after decades of conflict.

“There are no magic solutions,” he said.

Riot police have unleashed water cannons, tear gas, rubber bullets and live fire to clear the streets of protesters, who amassed despite curfews and an internet blackout across three-quarters of Iraq.

On Friday, Abdel Mahdi gave his full support to the security forces, insisting they were abiding by “international standards” in dealing with protesters.

As protests and clashes gained in intensity, many Baghdad shops and petrol stations remained shuttered Friday.

In a residential area near the protest site, crowds gathered to buy vegetables and fruit, with one shopkeeper saying the price of tomatoes, grapes and other greens had risen threefold.

Northern and western provinces that were ravaged in the 2014-2017 war against the Islamist State group have remained relatively quiet.

The United Nations and Amnesty International urged Iraqi authorities to respect the right of peaceful assembly.

“We are worried by reports that security forces have used live ammunition and rubber bullets in some areas, and have also fired tear gas canisters directly at protesters,” Marta Hurtado, spokeswoman for the UN human rights office, told reporters in Geneva.

An internet blackout was a “draconian measure… to silence protests away from cameras and the world’s eyes”, she added.