White House ‘will not co-operate with impeachment inquiry’ 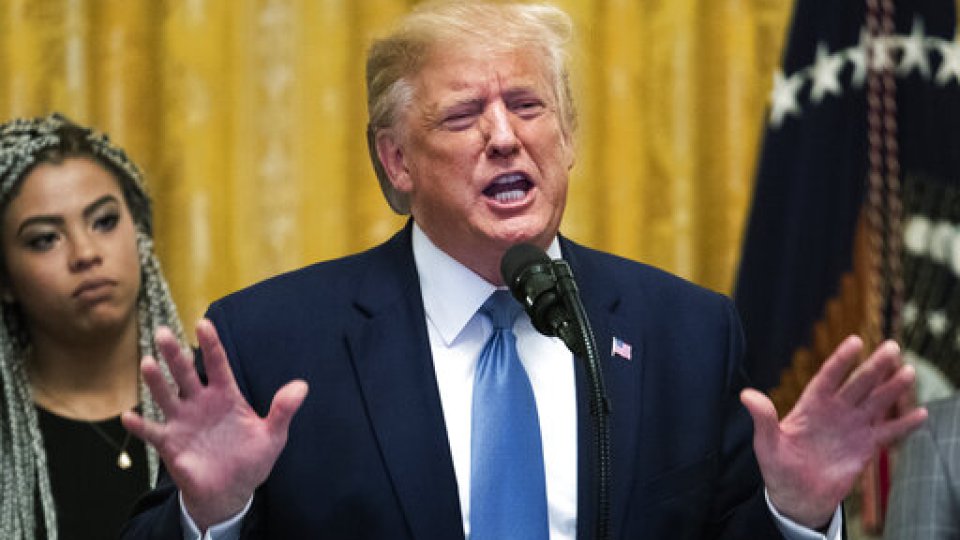 The White House has officially refused to co-operate with the impeachment inquiry against President Donald Trump.
A letter sent to Democratic leaders rejected it as “baseless” and “constitutionally invalid”.

Three Democratic-led House committees are investigating Mr Trump.The inquiry is trying to find out if the president held back aid to Ukraine to push it to investigate Joe Biden, who is running for the Democratic presidential nomination.

The White House letter comes hours after the Trump administration blocked the US ambassador to the European Union from appearing before a congressional impeachment investigation.

What does the letter say?

White House counsel Pat Cipollone addressed the eight-page letter to the leading Democrat and House Speaker, Nancy Pelosi, and the three chairmen of the Democratic committees.He accused the leaders of setting up an inquiry “that violates fundamental fairness and constitutionally mandated due process” – specifically by not holding a vote on launching the inquiry.

The letter accuses Democrats of trying to change the 2016 election result, and attacks the investigation as “constitutionally invalid and a violation of due process”.

“In order to fulfil his duties to the American people… President Trump and his Administration cannot participate in your partisan and unconstitutional inquiry under these circumstances.”

Two weeks into the House of Representative’s impeachment inquiry, the US is approaching a constitutional crisis.

While the White House’s written response to Speaker Nancy Pelosi took eight pages, the message was simple. No depositions. No documents. No co-operation whatsoever.

The administration is questioning the legitimacy of the entire investigation, calling the process “unconstitutional”. Democrats counter that the Constitution itself gives the House “sole power of impeachment” – and that they will continue their investigation with or without the White House’s consent.

Democrats at this point have several options. They could cite the administration for obstruction and make that, itself, an article of impeachment.

They could attempt to accommodate the White House’s unspecified demands, hoping to encourage its assistance.

Or they could try to use the courts to compel the White House to co-operate.

The judicial branch, however, might be loath to adjudicate a stand-off that is nothing short of political warfare. This raises the very real prospect that Mr Trump may not feel he has to respect any conclusions drawn by the House – and, if it comes to it, call into question the validity of a Senate trial, as well.

This is uncharted territory. And as both sides acknowledge (albeit drawing entirely different conclusions), the presidency – and perhaps the rule of law itself – are at stake.

What’s the latest in the impeachment inquiry?

Mr Cipollone’s letter comes hours after the White House blocked Gordon Sondland, the US ambassador to the EU, from speaking to the three Democratic committees behind closed doors.

His lawyer Robert Luskin said Mr Sondland was “profoundly disappointed” as he had travelled to Washington from Brussels in order to prepare for his appearance.

“Ambassador Sondland believes strongly that he acted at all times in the best interests of the United States, and he stands ready to answer the Committee’s questions fully and truthfully,” the statement said.

In a tweet, the president said Mr Sondland would only have been appearing before a “kangaroo court”.

But House intelligence committee chairman Adam Schiff told reporters the envoy had text messages or emails “deeply relevant” to the inquiry on a personal device. He said those communications had been passed to the Department of State, which was withholding them.

2019-10-09
Enamul Haque Renu
Previous: 4 to die for killing boy in Sylhet
Next: Not natural gas, LPG to be exported to India, says PM