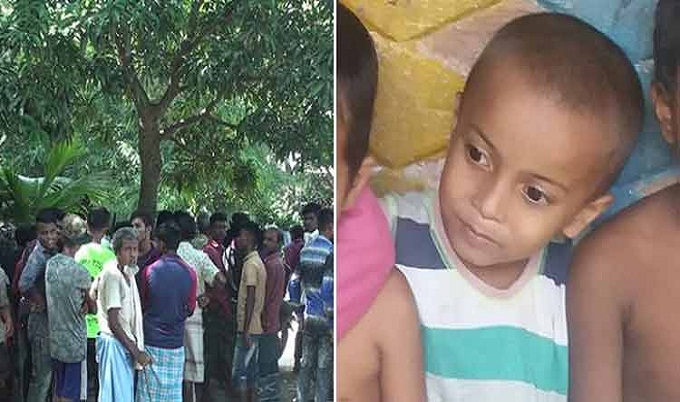 Sunamganj Correspondent : Miscreants brutally killed a five-year-old boy, dismembering his ear, genital and the throat in Derai upazila of Sunamganj.

His body was found dangling from a tree of his house at Kejaura village under Rajanagar union of the upazila on Monday morning (October 14).

According to family sources, 5-year-old Tuhin was seen missing in his bed deep at night, but the door of his room left open. After an exhausted search in the neighborhood, he was found in the morning. Some unknown miscreants killed him at night, leaving behind two knives thrust into his belly.

Apart from regular police, Detective Branch of police is also investigating the death. Criminal Investigation Department (CID) is, as it was learnt, also on the way for further investigation.

Baser Miah, father of the deceased, said: “I don’t know who took my son away at night and why killed him so mercilessly. I’m just a farmer and don’t have such enmity with anyone.”