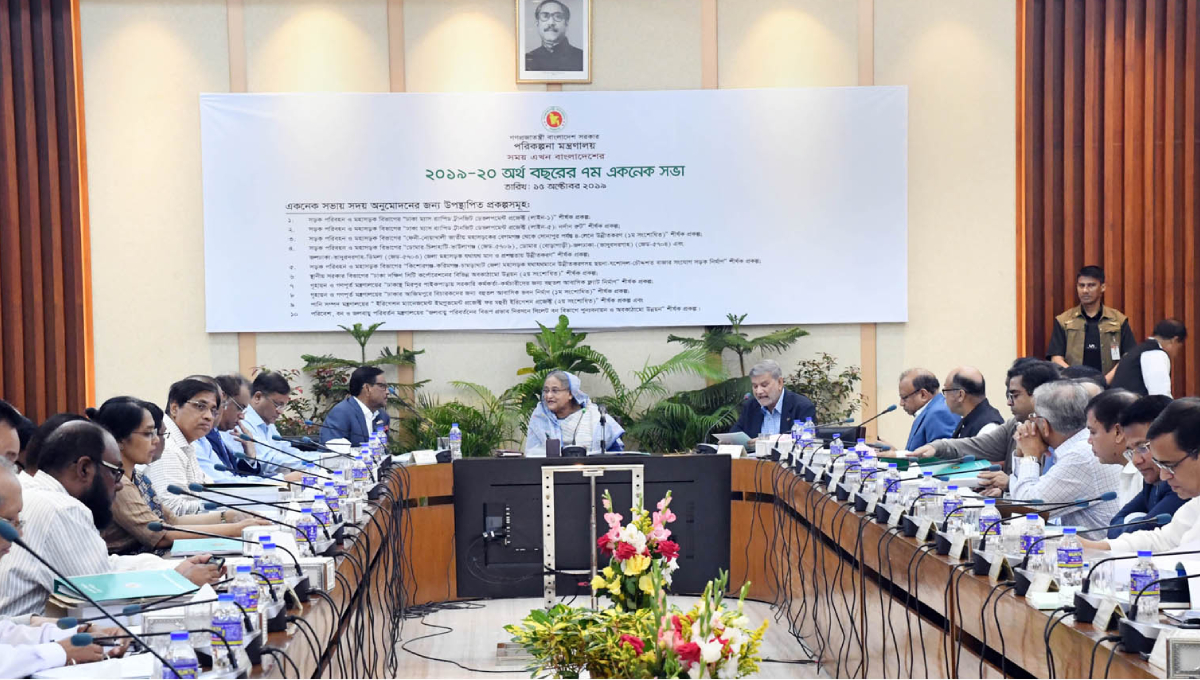 The approval came from the weekly Ecnec meeting held with Ecnec Chairperson and Prime Minister in the chair at the NEC conference room.

The meeting also cleared eight other projects, including four revised ones.

Of the total cost, Tk 30,466.2 crore will be borne by the national exchequer, while Tk 69,043.37 crore will come as project assistance from foreign sources –-JICA and ADB—and the rest Tk 515.84 from the owned funds of the agency concerned, he said.

About two mega projects, the Planning Minister said the Dhaka Mass Rapid Transit Development Project will be implemented on Biman Bandar-Kamalapur route and Natun Bazar-Purbachal Depot from September 2019 to December 2026.

The Dhaka Mass Rapid Transit Development Project will be implemented on Hemayetpur-Aminbazar-Gabtoli-Mirpur-Kachukhet-Banani-Gulshan-2-Natunbazar-Bhatara route from July 2019 to December 2028.

Revealing the implementation rate of the Annual Development Programme (ADP) in the first quarter (July-September) of the ongoing fiscal year, the minister said the implementing-agencies could spend 8.06 percent of the ADP allocation with an expenditure of Tk 17,344 crore, which was 8.25 percent with an expenditure of Tk 14,927 crore during the same period of the last fiscal year.

Mannan said Prime Minister Sheikh Hasina asked the authorities concerned to keep the provision of roads and railways in the MRT system in the future without harming the beauty of Hatirjheel during implementation of the MRT Line-1 project.

The Prime Minister directed the relevant authorities to encourage people to use cylinder gas or LPG as no more household gas connections will be provided to any house and flat.

The eight other projects approved at the meeting include upgrading Begumganj-Sonapur portion of Feni-Noakhali National Highway to a four-lane one (1st revised) with Tk 1,485.38 crore, upgrading Domar-Chilahati-Daolaganj, Domar-Jhaldhaka and Jhaldakha-Bhadurdargah-Dimla district highway with Tk 421.05 crore, upgrading Kishoreganj-Karimganj-Chamraghat district highway and construction of Choina-Jashodol-Chouddashata Bazar with Tk 731.32 crore.

At the beginning of the meeting, the Prime Minister was greeted with bouquets for receiving three international prestigious awards during her recent visit to the USA and India.