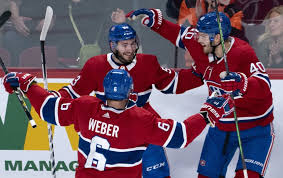 Montreal,  OCT 18 : Carey Price made 17 saves for his first shutout of the season and Victor Mete and Nick Suzuki scored their first NHL goals in a first-period burst in the Montreal Canadiens’ 4-0 victory over the Minnesota Wild on Thursday night.

Joel Armia and Brendan Gallagher also scored and Nick Cousins had an assist in his Montreal debut to help the Canadiens improve to 3-2-2. The 32-year-old Price has 45 career shutouts.

Alex Stalock stopped 28 shots for the reeling Wild. They dropped to 1-6-0.

Playing his 127th NHL game, the 21-year-old Mete opened the scoring with 5:23 left in the first. He found space in the slot, took a backhand pass from Cousins from behind the net and beat Stalock to the glove side. That ended the longest goal drought to start a career in Canadiens history, a mark previously held by Mike Komisarek at 122 games.

Armia connected on a 5-on-3 power play with 2:28 left, and Suzuki scored with 37 seconds remaining in the period. Gallagher finished the scoring in the third period.

Josh Bailey scored into an empty net on another power play with 27 seconds left in the third period to cap New York’s third straight victory and seal Winnipeg’s third loss in a row.

Nikolaj Ehlers had a power-play goal for Winnipeg and Connor Hellebuyck made 23 saves.

The Islanders didn’t get their sixth shot until 7:41 of the second period — and it was a power-play goal by Barzal that tied it 16 seconds after Dmitry Kulikov went to the penalty box for tripping.

Barzal broke the tie with 17 seconds remaining in the second period.

Leivo lifted a shot over Jordan Binnington in the bottom half of the sixth shootout round. Bo Horvat, J.T. Miller and Micheal Ferland scored in regulation for the Canucks.

Vladimir Tarasenko, Alex Pietrangelo and Robby Fabbri scored for the defending Stanley Cup champion Blues. They have lost three in a row.

After the first three shooters for both sides failed, Stamkos put a wrist shot past Tuukka Rask. Andrei Vasilevskiy then stopped Jake DeBrusk.

NEWARK, N.J. (AP) — Kyle Palmieri and Myles Wood scored in the second period and New Jersey held off New York for its their first victory of the season.

Blake Coleman, Nikita Gusev and P.K. Subban also scored and Mackenzie Blackwood made 29 saves to help the Devils improve to 1-4-2. Tony DeAngelo and Jesper Fast scored for the Rangers.