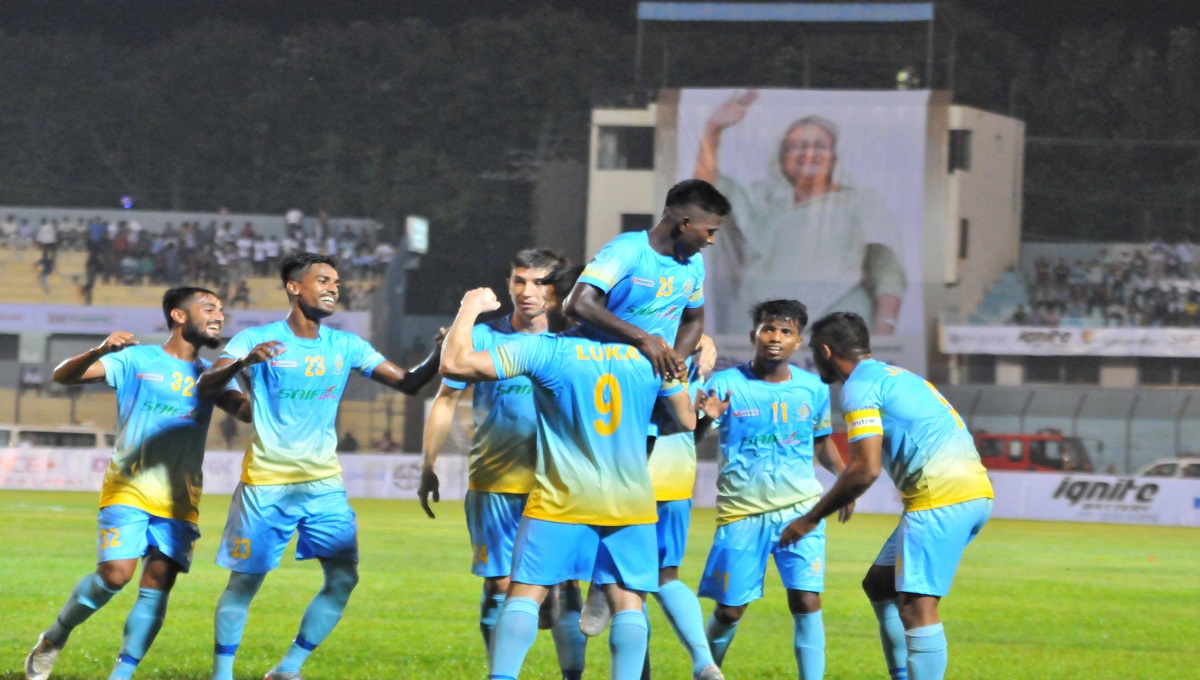 Chattogram, Oct 19 : Former champions and hosts Chattogram Abahani Limited got off to a flying in the 3rd edition of Sheikh Kamal International Club Cup Football Tournament upsetting defending champions TC Sports Club of the Maldives by 4-1 goals in the opening match at the floodlit MA Aziz Stadium here on Saturday.

In the match, hosts Chattogram Abahani dominated over the TC Sports Club from the very beginning and took its fruits in the 8th minute when Chinedu Matthew opened the account for the home side by his close-range right footer from the danger zone off a pass from midfielder Ariful Islam (1-0).

Just after two minutes, national defender Yeasin Arafat doubled the margin for Chattogram Abahani by a long-range left-footed shot from outside the box in the 10th minute (2-0).

Chattogram Abahani put pressure on their opponents’ defence with their attacking football and produced some more close chances.

In the 36th minute, Rotkovic Luka and national forward Sohel Rana failed to place the ball inside the net from the box.

But Chinedu Matthew did not miss the chance to score his second goal in the 39th minute as TC Sports Club’s defenders failed to clear the ball from the danger zone to lead the first half by 3-0 goals.

Defending champions TC Sports Club came alive and tried to come back in the game after the half time.

TC Sports Club booters made several attacks but all of their attempts were foiled by Chattogram Abahani goalkeeper Mohammad Nehal and also by the defenders.

On the other hand, hosts Chattogram Abahani carried on with their counter-attack tactics and bagged its fruits in the 71st minute.

Rotkovic Luka sealed the fate of the match scoring the 4th goal from a goalmouth melee when opponent goalkeeper Ibrahim Nadheem Adam failed to grab the ball (4-0).

In the 88th minute, forward Ismail Easa scored the consolation goal for TC Sports Club by an inside box header off a long range shot from defender Mohamed Samir (4-1).

Maldives defender Akram Abdul Ghanee was cautioned with yellow card in the match.

Kolkata Mohun Bagan Club will play Young Elephants FC of Laos on Sunday also at 7pm at the same venue.

A total of eight teams — split into two groups — are participating in the prestigious international club cup competition.

BPL champions Basundhara Kings have been placed in Group B with Gokulam Kerala FC and Chennaiyin FC of India and Terengganu FC of Malaysia while Group A team comprises of Mohun Bagan AC of India, TC Sports of the Maldives, Young Elephants FC of Laos and hosts Chattogram Abahani Ltd.

The Sheikh Kamal International Club Cup, a biennial soccer event, was held twice in Chattogram in 2015 and 2017.

2019-10-19
Mr. Admin
Previous: 9 Bangladeshis were in KSA bus that crashed Thursday
Next: Anticrime Drive: Quader says no offender to be spared