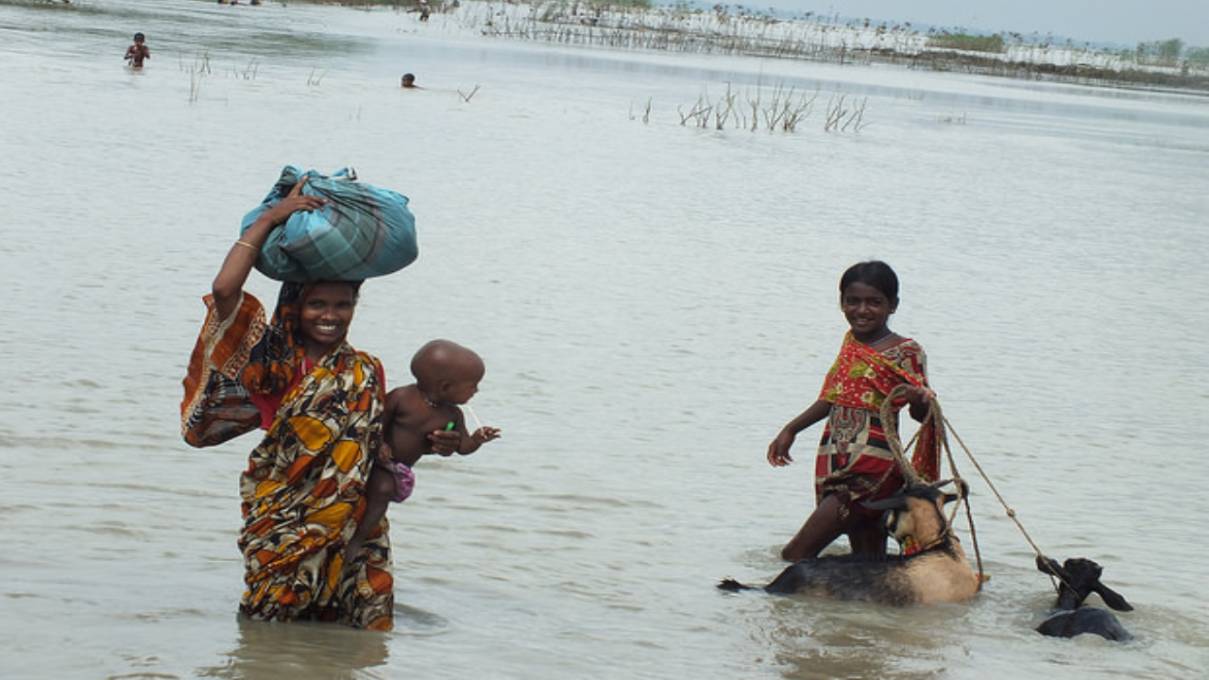 Dhaka, Oct 22 : Over 19 million children — a quarter of them under 5 — spread across Bangladesh are at the front line of climate change disasters, a UN report says mentioning that climate change threatens child nutrition here.

In 2018, 58.7 million children under 5 were stunted and almost 25.9 million were wasted in South Asia, the report says adding that more children and young people are surviving, but far too few are thriving.

The government of Bangladesh will begin the second phase of its ‘Climate Change Strategy and Action Plan’ this year, placing greater emphasis on the needs of the poorest and most vulnerable, according to the report.

The plan will be demanding more attention and resources to ensure that child nutrition, health, education, social protection, and other services are shielded from the effects of climate change.

Floods and riverbank erosion are driving families to city slums, where they face overcrowding and a lack of access to adequate health and nutrition services, adequate nutritious food, especially during first 1,000 days, education, sanitation, hygiene and safe water, according to the Unicef report titled ‘The State of the World’s Children (SOWC) 2019: Children, food and nutrition – Growing well in a changing world”.

In slums, children must often fend for themselves and are at greater risk of malnutrition, child labour, child marriage and exposure to pollution, violence and abuse, according to the South Asia section of the global report.

Extreme climatic events such as drought and flashfloods cause severe agricultural losses, it says.

In a country where 60 percent of the population counts on agriculture for their livelihood, this means children from the poorest families are most likely to go hungry, according to the report.

The reduced production also leads to an increase in food prices, hitting the poorest families the hardest.

A rise in communicable and non-communicable diseases linked to changing climate conditions and unplanned urbanisation also threatens children and their families, Unicef said.

These include diarrhoea, hepatitis A, cholera, dysentery, typhoid, dengue and chikungunya fever.

Ruma, her husband Ali Akbar, and their two children Sunjida, 3, and Shahaun, 9, moved to the Chalantika Slum of Dhaka after their home was repeated flooded by the Meghna River, the report mentioned.

“At least we can stand on dry ground here even if we struggle with the cost of living,” she said. “My husband earns about Tk 7,000 [US$83] a month. By the time we’ve paid our rent and bought our groceries there is very little left over. But at least we’re able to earn here, which we often weren’t able to do when we lived in the countryside.”

Ruma shares a small kitchen – a few planks of wood atop bamboo poles set in a swamp – with at least 10 other families.

Her family eats rice and lentils most days, she says, and can occasionally afford meat or fish. Her son, Shahaun, is showing signs of malnourishment.

In addition to the arduous challenge of trying to provide her family with healthy food, Ruma describes an unhealthy environment with no access to safe water, basic toilets or adequate hygiene.

Electricity in the slum is irregular, and rodents and insects in their single room “make our lives an absolute misery,” she says.

It is 20 years since the State of the World’s Children last examined children’s nutrition, and, in that time, much has changed.

Unicef’s flagship report examines the issue of children, food and nutrition, providing a fresh perspective on a rapidly evolving challenge. Despite progress in the past two decades, one-third of children under age 5 are malnourished – stunted, wasted or overweight – while two-thirds are at risk of malnutrition and hidden hunger because of the poor quality of their diets.

At the centre of this challenge is a broken food system that fails to provide children with the diets they need to grow healthy.

This report also provided new data and analyses of malnutrition in the 21st century and outlines recommendations to put children’s rights at the heart of food systems.