Cricketers call off strike as BCB gives in to demands 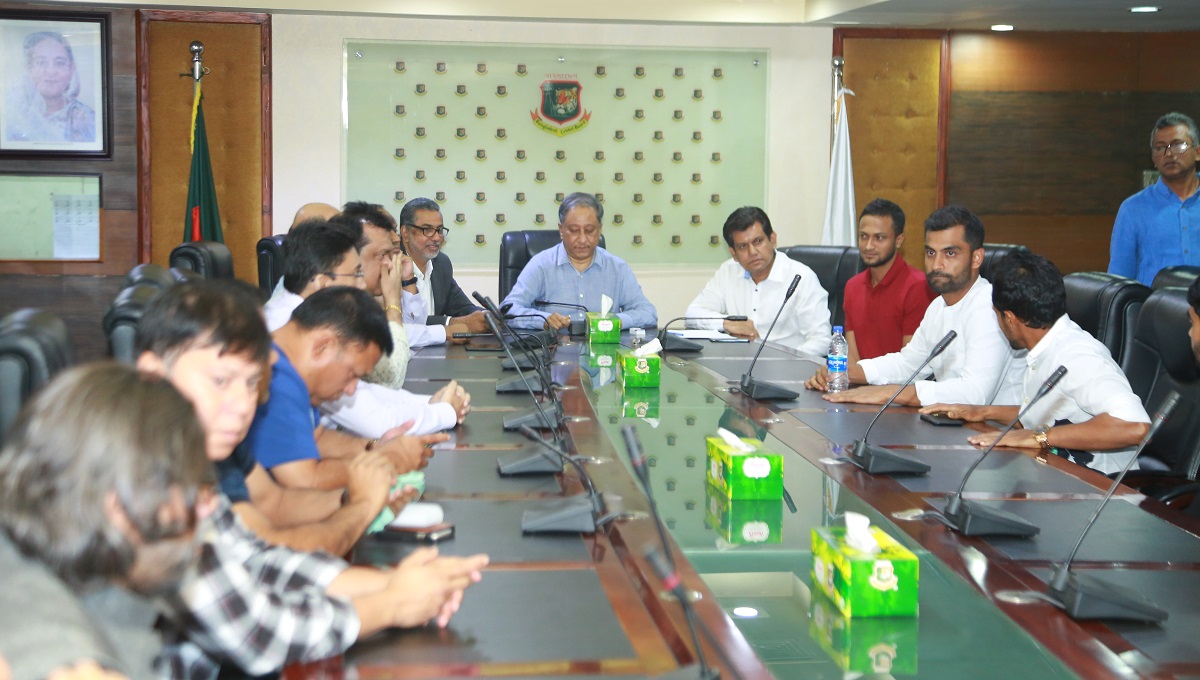 Striking cricketers sit in a meeting with Bangladesh Cricket Board (BCB) on Wednesday. Photo: Courtesy

Dhaka, Oct 23 : Bangladeshi cricketers withdrew their strike on Wednesday night as the Bangladesh Cricket Board (BCB) accepted nine of their 13 demands.

The decision came following a ‘fruitful’ meeting between the BCB and the striking cricketers at the BCB office at Sher-e-Bangla National Cricket Stadium.

The meeting that lasted for one and half hours started around 9:30pm.

The cricketers will return to the field on Saturday through the third round of the National Cricket League (NCL) which was deferred by two days.

The third round NCL was scheduled to begin on Thursday but the strike forced its deferment.

Briefing reporters after the meeting, BCB President Nazmul Hasan said steps will be taken within 2-3 days to meet the cricketers’ demands.

He, however, said they have nothing to do with the first demand about the resignation of the president and secretary of Cricket Welfare Association of Bangladesh (CWAB) as it is an independent body.

About the demand to allow cricketers to play in more than two foreign leagues, he said it differs from man to man. “Decision will be taken considering the situation.”

About the two other demands of sharing the revenue the BCB generates with the cricketers and implementing all the demands for women cricket as well, the BCB chief said they were yet to receive the demands.

Nazmul said the national camp of the Bangladesh team for the India tour will begin as usual on Friday.

Test and T20 Captain Shakib Al Hasan described the meeting as a fruitful one, saying they were happy.

Earlier in the evening, the striking cricketers placed a 13-point demand afresh and said they were ready to sit with the Bangladesh Cricket Board (BCB) to discuss their demands.

On behalf of the cricketers, Supreme Court lawyer Barrister Mustafizur Rahman Khan came up with the information while briefing reporters after a meeting of the cricketers at a Gulshan hotel in the evening.

With their previous 11 demands, the crickets added two more — sharing the revenue the BCB generates and implementing all the demands for women cricket as well.

After the 13-point demand was placed by Mustafizur, Shakib spoke at the press conference.

“We wanted to announce our demands in a better way and that’s why we took some time. We heard that the BCB wants us to meet them and talk about the crisis. We’ll definitely go to the BCB and talk to them. But before that, we have to discuss the next course of action,” he said.

Earlier, the BCB informed the media that they are up to talk to the cricketers to reach a solution.

On Monday, the cricketers placed an 11-point demand and announced that they will not take part in cricketing activities unless their demands were met.

These demands include immediate resignation of the president and secretary of Cricket Welfare Association of Bangladesh (CWAB), returning to the previous model of Dhaka League, and the BPL from the next year, increasing the match fee in the first-class cricket to 1 lakh from present Tk 35,000, hiking the salaries of the national cricketers, local coaches, physios, trainers and groundsmen, arranging more domestic cricket events, fixing stable domestic calendar, clearing cricketers’ dues for the Dhaka League and ensuring cricketers’ opportunities to play more foreign leagues.

2019-10-23
Mr. Admin
Previous: EVERYBODY KNOWS ABOUT IT EXCEPT THE ACC
Next: Md Belayet Hossain new Bridge Division secretary