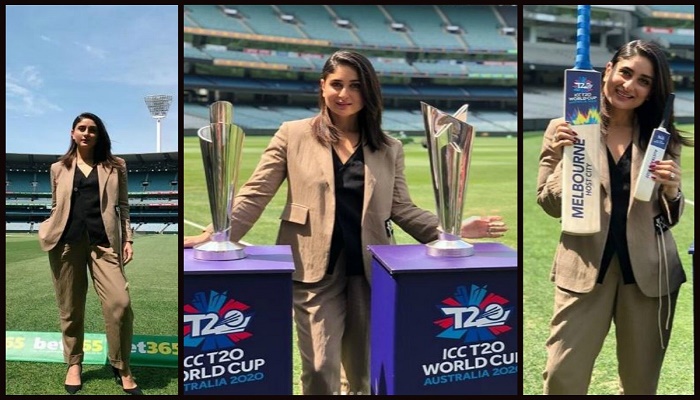 Bollywood actor Kareena Kapoor Khan unveiled the 2020 ICC World Cup trophies in Melbourne of Australia on Friday.
She revealed the trophies for both men and women’s tournament at the Melbourne Cricket Ground ( MCG).Kareena was seen dressed in formal attire, a khaki suit with a black waist-coat shirt to complete the look, reports The Statesman.

The actor felt honoured for being a part of the unveiling ceremony.

The Women’s T20 World Cup will begin from 21 February 2020 and will go on till 8 March while the Men’s Cup will commence from October 18 and will conclude on November 15 in Australia.

In the Women’s T20 World Cup, Bangladesh qualified in Scotland and is part of Group A along with defending teams of Australia, India, New Zealand, and Sri Lanka.

Thailand, which played its first women’s international match 12 years ago, also created history by qualifying for the tournament. They are part of Group B which includes England, South Africa, West Indies, and Pakistan.

The final match of the tournament will be played on March 8, International Women’s Day, at the Melbourne Cricket Ground and thus the reference of the tweet that the World Cup handle put out along with pictures of Kareena.Later in October-November 2020, 16 teams will be playing the ICC Men’s T20 World Cup.