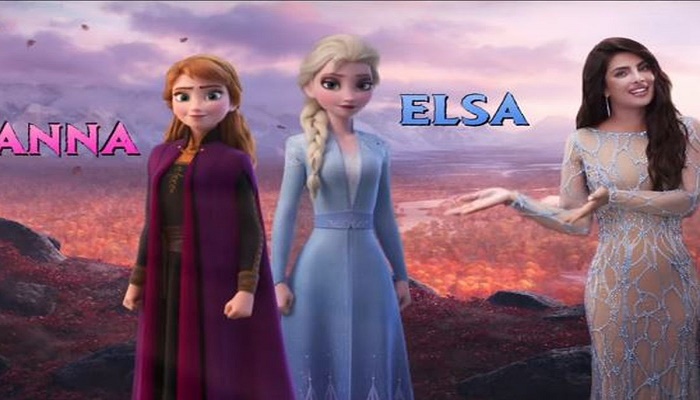 As the Frozen franchise returns after six years, excitement built ahead of the sequel’s release is at its absolute peak. In the spotlight for being the leading lady to voice Elsa in the Hindi version of Frozen 2, bollywood actor Priyanka Chopra Jonas sure seems to be enjoying her role of a girl in command, reports The Statesman.
Makers shared a video featuring The Sky Is Pink star ahead of the film release on 22 November 2019.The short video gives a glimpse of Frozen 2 celebrating its lead characters, Elsa and Anna, who are warriors in their own right.

Backed by Priyanka’s inspiring voice in a motivational dialogue promo, her voiceover suggests that women of today do not need a ‘Prince Charming’ .

Women of today will carve out their own path in their unique style making a statement that the world will remember. The days of the damsel in distress waiting for the Prince Charming to come and save her are long gone and that story of the film is suggestive of that.

Earlier, makers announced that Priyanka Chopra and Parineeti Chopra have roped in to voice the characters of Elsa and Anna respectively in the animated feature film.

Commenting on her association with the project, Priyanka Chopra Jonas said, “Elsa is a fictional character who’s known to be strongly-opinionated and level headed, traits that I deeply connect with. This not only made me want to be part of the film, but also gives me a wonderful opportunity to present one of the most-successful animated films to our local audiences. My happiness just goes up a notch knowing that Parineeti will be voicing Anna’s character. The two of us have never worked together before and this seems like a perfect movie to come together and an experience that I am going to cherish forever.”

After voicing the character of Ishani in the 2013 film Planes, the voice of Kaa in the Hindi version of The Jungle Book in 2016, Frozen 2 will mark Priyanka Chopra Jonas’ third stint with Disney where she has lent her voice to a film.