Kamal Haasan to unveil father’s statue on his birthday 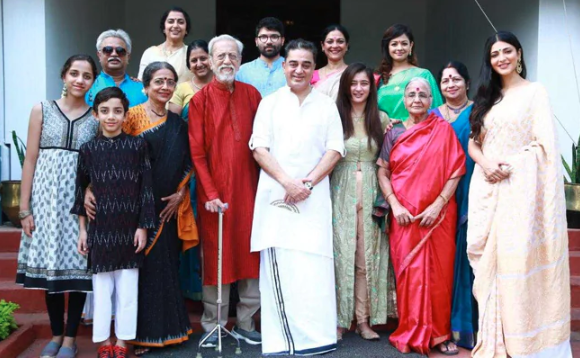 Indian actor-turned-politician Kamal Haasan turns 60 on Thursday. The year also marks his sixty years in Indian cinema. He made his debut in films as a child artists at the age of five and evolved into one of the most versatile actors in the country.
West Bengal Chief Minister Mamata Banerjee wrote, “Wishing you a very happy birthday Kamal Haasan Ji. The country needs more strong voices like you.” With thousands of people wishing Haasan, the hashtag #HBDKamalHaasan was the top trend on Twitter.

Grand celebrations have been planned for three days, starting today. Haasan’s family will unveil the statue of his father D Srinivasan at their ancestral home at Paramakudi in Ramanathapuram district today.

“It’s an important day. My dad’s death anniversary too. He’s a teacher who taught me through his life and death. In his name, we plan to start a talent development centre,” Kamal Haasan said.

On Friday Kamal Haasan will unveil the statue of his mentor, writer and director K Balachandar at his company’s office. Superstar Rajinikanth, Mr Haasan’s longtime friend, is likely to attend the event.

On November 17, there will be a mega musical programme by music maestro Ilayaraja in which Rajinikanth is expected to speak.

Kamal Haasan launched his party – Makkal Needhi Maiam – in February last year and fielded candidates in all 39 Lok Sabha seats in Tamil Nadu. Since his entry into politics, Haasan has emerged as a key voice in Tamil Nadu politics.Be it the language row, the hoarding culture in Tamil Nadu or the case against celebrities,  Haasan has not shied away from making his stand on controversial topics clear.

In his birthday message to his fans and supporters last year, he said he would like them to work for society and not spend their time and effort to meet and greet him on his birthday.

Rajinikanth, who has also joined politics, skipped the national polls to focus on the 2021 Tamil Nadu election.