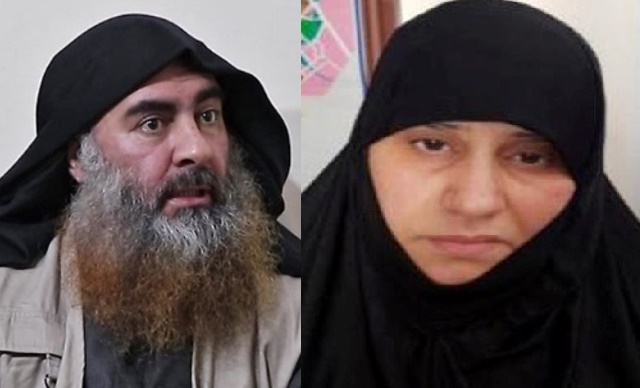 A woman married to the slain Islamic State leader Abu Bakr al-Baghdadi has been captured and is in Turkish custody, Turkey’s president, Recep Tayyip Erdogan, has said.
Erdogan made the announcement during a speech in Ankara on Wednesday but did not provide any further details. “The United States said Baghdadi killed himself in a tunnel,” Erdogan said, criticising the US for a “communications campaign” over the jihadist’s death.

“But, I am announcing it here for the first time: we captured his wife and didn’t make a fuss like them. Similarly, we also captured his sister and brother-in-law in Syria.”It is not clear when or how the unidentified woman was arrested by Turkish forces, but Ankara said earlier this week it had captured several of the jihadist’s relatives, including his elder sister Rasmiya Awad, in the northern Syrian town of Azaz, in Aleppo province.

The IS leader blew himself and three children up in a tunnel after US special forces entered his heavily-fortified compound in Syria’s Idlib province during a raid on 26 October.

According to Baghdadi’s brother-in-law Muhammad Ali Sajid, who is in Iraqi custody, he had four wives when he last met him in the summer of 2018 – the maximum allowed under Islamic law. It is not clear if any of his wives were present during the US attack.

One of the women is an Iraqi known as Nour, the daughter of one of his aides. At one point, Baghdadi was also believed to be married to a German teenager, but she was reported to have fled his house in 2016.

Ex-wife Saja al-Dulaimi, an Iraqi national, also left him in 2009 while pregnant. She was arrested in Lebanon in 2014 and freed a year later in an al-Qaida prisoner swap.

Awad was reportedly arrested in a trailer on Monday in a part of north-west Syria under Turkish control, along with her husband, daughter-in-law and five children.Turkish officials claim she possesses valuable intelligence regarding IS operations. It was not immediately clear if her capture produced intelligence that led to the capture of the unidentified wife.

The US raid on Baghdadi’s compound was a major blow to the extremist group, which lost control of its last slivers of territory in Syria in March this year.

IsS has since announced Abu Ibrahim al-Hashimi al-Qurayshi as Baghdadi’s successor, but little is known about him. Intelligence officials believe the name is a nom de guerre.