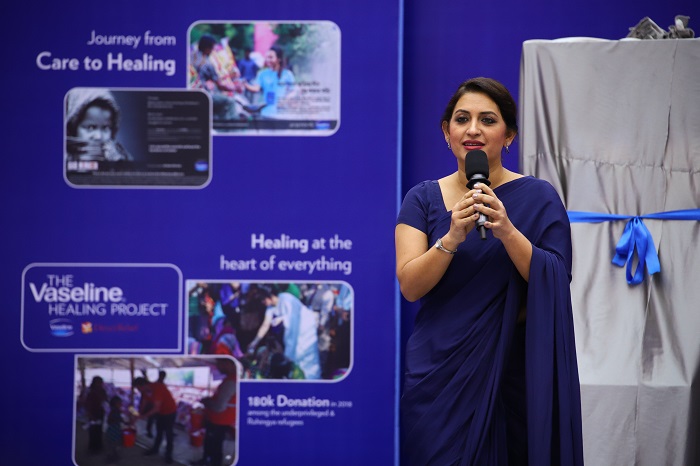 Vaseline has been running this initiative for the past four years as an attempt to address and heal the skin-related problems of the underprivileged people in the North, by donating jars of Vaseline petroleum jelly.  On this occasion a kiosk was placed in Bashundhara City Shopping Complex to receive donations from the general people.The renowned actress expressed her gratitude for being associated with this noble cause for so many consecutive years now. She further added, “I have had the privilege to closely have a look at the skin related problems suffered by the underprivileged people in the North by being a part of this project initiated by Vaseline in the previous years. I take pride in being able to do something for the people of our country through supporting the Vaseline Healing Project.”

The Category Head of Skin Care-Mr. Nurul Monowar mentioned how the cumulative effort of Vaseline Bangladesh and partner TMSS (Thengamara Mohila Sabuj Sangha) has effectively helped to resolve the skin-related problems of the disadvantaged people of various regions and has been widely praised by all. Moreover, they also mentioned about their aim of reaching more than three lakh deprived individuals with Vaseline and skin-related services this year.

Furthermore, Vaseline plans to situate a kiosk in 40 other places including Bashundhara City Shopping Complex in Dhaka.  These kiosks will be placed as an attempt to create a chance and influence the general people to come forward and donate a small jar of Vaseline for the disadvantaged people in the North. Moreover, donations can also be made online through Shajgoj.com. Keep an eye on the Vaseline Facebook page to know further.