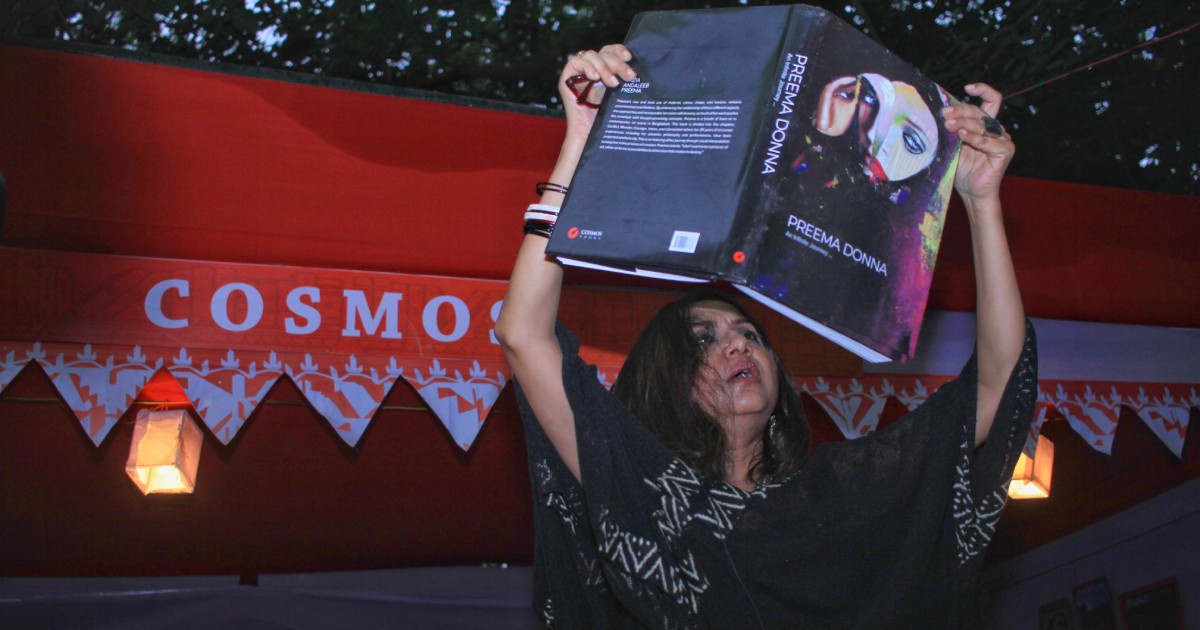 Representing Bangladesh throughout a majestic career of 25 glorious years as a prolific visual artist, Nazia Andaleeb Preema is an established name in the global art community. Tuesday marked the birthday of this dynamic, talented and successful artist.

Her enthralling artistic journey was celebrated this year through her book ‘Preema Donna: An Infinite Journey’, an artistic visionary book which was unveiled with her enthralling, mystic performance at this year’s Dhaka Lit Fest.

Published and produced by Cosmos Books, the book’s foreword has been written by National Professor Dr Anisuzzaman. Divided into five chapters, the book depicts Preema’s artistic journey of 25 years.

Portraying Preema’s brave approach of aesthetical vision that depicts her philosophy of context, ‘Preema Donna’ has already started earning critical acclaim from the art enthusiasts of the country.

“This publication is my inspiration to be more committed towards my intense journey of creativity, and I dedicated the book to the next generation of creative minds to proceed with their passion in art. I believe it is a vice-versa process, and I urge them to have a deeper look at life- a process which made whoever I am today,” Preema said about her book.

She thanked Cosmos Group and Enayetullah Khan for always supporting artistes with initiatives such as this publication.

The artist has showcased her performances in many international exhibitions, including the ongoing 58th La Biennale di Venezia, 2019 in Italy. Her work, ‘Fake news, women and visibility paradox’, is currently being showcased at the biennale, which marks Bangladesh’s third consecutive participation in the ongoing Venice Art Biennale.

Preema did her Graduation (BFA) and Masters (MFA) from (drawing and painting department) of Dhaka University. To complement her creative urge, she completed a seven-year certificate course in Tagore and classical music from Chhayanaut Sangeet Vidyayatan. She received fellowship in Visual Arts from the “Global Art Village”, New Delhi, India in 2005.

Preema is also an advisor and creative editor to Bangladesh Brand Forum and Consultant for web, graphic and digital art for local and multinational corporate houses for the last 14 years.

A pioneer web-master and graphic designer in Bangladesh who started her career in 1997 and is still going strong, Preema has been working with various prestigious national and multi-national organisations as a web and graphic design consultant since 1997. She is now exploring her majestic digital experimentations, which include video installation, performance and digital illumination, along with the traditional techniques of art.

Preema’s painting was auctioned for Cancer Charity (2008) at the “Grosvenor House”, London.

She is one of the very few artists with distinct technique and unbeatable boldness in Bangladesh who has incorporated new media (performance, video installation and digital art) over genres, ranging from traditional to digital through challenging her limits. These made Preema one of the dynamic and provocative contemporary visual artists of today’s generation in the country.