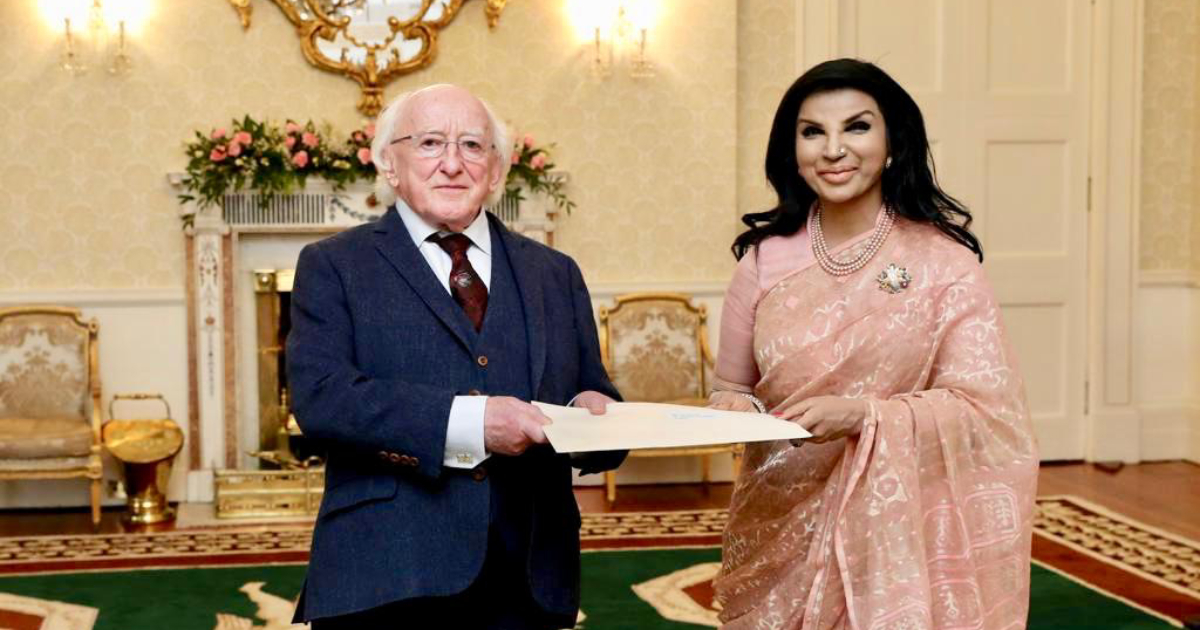 Bangladesh High Commissioner to the United Kingdom Saida Muna Tasneem has presented her letter of credence to Irish President Michael Daniel Higgins as a non-resident ambassador of Bangladesh to Ireland.

The ceremony was held at the President’s residence called Áras an Uachtaráin in Dublin on Wednesday, the High Commission said Thursday.

The Bangladesh Ambassador was accompanied by her spouse Tauhidul I Chaudhury.

On her arrival at the President’s residence, the Bangladesh Ambassador was accorded a guard of honour, witnessed by the Irish President along with his spouse, Irish Minister for the Diaspora and International Development and high officials of Ireland’s foreign ministry.

At the ceremony, Ambassador Tasneem conveyed the warm greetings of Bangladesh’s President Md Abdul Hamid and Prime Minister Sheikh Hasina to the Irish President and reaffirmed her commitment for further developing the excellent bilateral relations that have been existing since Bangladesh’s recognition by Ireland in early 1972.

Recalling the moral support of the people of Ireland during Bangladesh’s War of Liberation, Bangladesh Ambassador hoped that the two countries would jointly celebrate the 50th year of diplomatic relation in 2022.

She conveyed the Irish President that Bangladesh will celebrate the 100th birth anniversary of Father of the Nation Bangabandhu Sheikh Mujibur Rahman from March 2020 to 2021 and looked forward to celebrating the birth centenary with the government of Ireland in 2020-2021.

She thanked the Irish government and the people for providing all-out support to the flourishing Bangladeshi-Irish Diaspora living in Ireland and underlined the need for expediting the visa and work permit services for skilled Bangladeshi migrants recruited by multinational companies in Irish IT sector.

The Ambassador noted that Ireland is currently the European hub for IT sector’s multinational companies (MNCs) and underlined the need for taking a fresh look by Irish companies at Bangladesh’s software outsourcing capabilities, including its 600,000 freelance IT professionals.

The envoy also emphasised the need for further enhancing and diversifying of Bangladesh-Irish bilateral trade, including in the readymade garment (RMG) sector.

She invited the Irish government to open an Embassy in Dhaka and organise regular high-level bilateral visits that would take Bangladesh-Ireland relations to a new height.

The President expressed his interest in Bangladesh’s efforts in combating the risks from climate changes and realising the targets of the Sustainable Development Goals (SDGs).

He also appreciated the fact that the birthday of Bangabandhu and St Patrick’s Day fall on the same day of 17th March and look forward to celebrating Bangabandhu’s birth centenary in Ireland.

Minister of State for the Diaspora and International Development Ciaran Cannon TD, Secretary-General to President Art O Leary and Deputy Secretary-General of Department of Foreign Affairs and Trade Brenden Rogers were present at the ceremony. First Secretary of Bangladesh High Commission in London Md Shafiul Alam attended the event.

At the ceremony, the Bangladesh Ambassador and the Irish minister also exchanged views on bilateral issues and interests.

Besides, the Ambassador attended a reception hosted in her honour by the Bangladesh-Irish community and exchanged views with them on different issues.

The community leaders praised the regular and improved consular and visa services in Ireland provided by the Bangladesh High Commission in London.

Proposals to make streets safer for walking and cycling in Bow

Council warns rogue landlords to ‘get their house in order’

Government must restore free travel for U18s and elderly Londoners