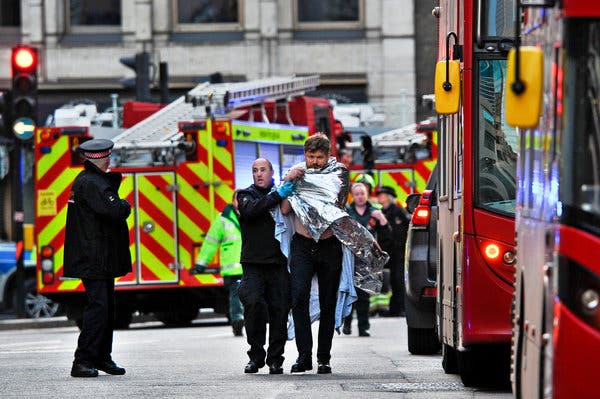 A man wearing a hoax explosive device went on a stabbing spree near London Bridge on Friday, killing two and wounding three others before he was shot and killed by police, authorities said. British police are calling the attack a “terrorist incident.”
London’s Metropolitan Police identified the suspect as 28-year-old Usman Khan, who had been residing Staffordshire area, located about 150 miles northwest of London. Neil Basu, the department’s assistant commissioner for specialist operations, said police are not actively searching for anyone else in connection with the attack. Police are conducting searches at an address in Staffordshire, Basu said.

Khan was arrested in 2012 for terrorism offenses and was released in December 2018, Basu said.The attack started at a local conference venue and police were called to the scene at 1:58 p.m. local time, said Cressida Dick, the commissioner of London’s Metropolitan Police Service. Five minutes later, police confronted the attacker, she said, adding that members of the public showed “extraordinary courage” by stepping in to tackle him. Police in Britain do not normally carry guns.

The three wounded were being treated at two local hospitals in the city, the London Ambulance Service said in a statement.

“All of a sudden we saw some police cars and then moments later heard two gunshots,” Einer Orn, who works near London Bridge, told BBC News. Orn said he heard “gunshots and people started to run off the bridge.”

London Mayor Sadiq Khan commended the “breathtaking heroism” of civilians “who literally ran towards danger” without knowing the device strapped to the suspect was a fake. “I want to say thank you to them on behalf of all Londoners,” Khan said.

“We must — and we will — stay resolute in our determination to stand strong and united in the face of terror,” Khan said in a statement. “Those who seek to attack us and divide us will never succeed.”

Prime Minister Boris Johnson said “to the best of our knowledge the incident has been contained,” but he urged the public to remain vigilant. “One cannot help but think back to what happened in 2017 in the same part of the city,” Johnson said.In 2017, eight people were killed in a terrorist attack on London Bridge when three men in a white van ran over pedestrians on the bridge, then exited the van and began stabbing people in nearby Borough Market.