Priyanka Chopra and Nick Jonas celebrate Thanksgiving with “too much food” 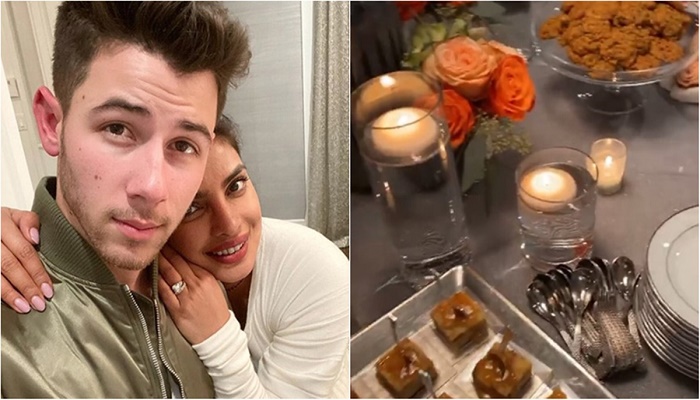 Bollywood actress Priyanka Chopra and Nick Jonas had a grand Thanksgiving dinner with friends and family at their residence in the US on Thursday, reports The Indian Express.
The power couple shared several videos and clicks on their Instagram accounts, raving about the grand feast.Posting a click of herself and Nick Jonas, Priyanka wished her fans on the occasion of Thanksgiving.

Nick Jonas too shared a video where he took us through the huge spread of food and sweets at their Thanksgiving dinner. He posted two other videos on his Instagram stories post their dinner. It has Priyanka saying, “Too much food has been consumed.”

Priyanka Chopra, who recently returned to the US, gifted Nick Jonas a dog. The two have named the puppy, Gino Jonas.

Priyanka and Nick are set to mark their first marriage anniversary on December 1.

They had a Hindu and Christian wedding last year at the Umaid Bhawan Palace, Jodhpur.