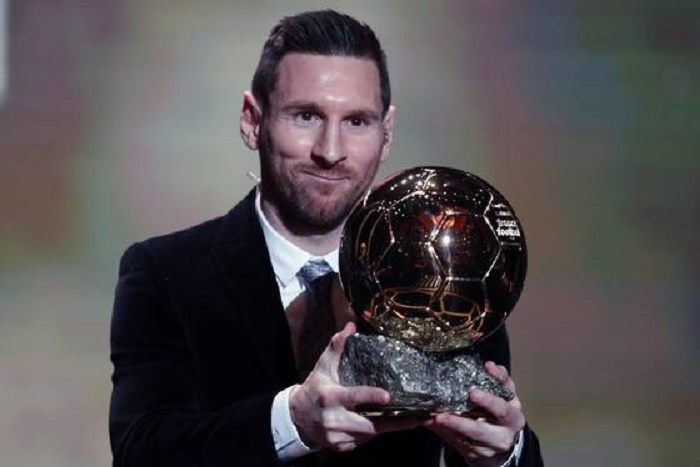 The Barcelona number 10 previously won the award in 2009, 2010, 2011 and in 2012 before claiming his fifth Ballon d’Or in 2015.
Lionel Messi won a record sixth men’s Ballon d’Or award at a ceremony in Paris on Monday, beating Liverpool defender Virgil van Dijk to take the honours.Now aged 32, it is Messi’s first Ballon d’Or since 2015 and his sixth overall as he moves one ahead of his old rival Cristiano Ronaldo, who finished third in the voting.

Messi, who attended the ceremony at the Chatelet Theatre in the French capital with his wife and children, succeeds Luka Modric, the Real Madrid and Croatia midfielder who won the prize last year.

This latest honour comes after he also claimed FIFA’s equivalent award, The Best, in September.

“It is 10 years since I won my first Ballon d’Or here in Paris and I remember coming here with my three brothers, I was 22 and it was all unthinkable for me what I was going through,” Messi said on stage.

“Now ten years on this is my sixth, in a very different time, very special in my personal life with my wife and three children.”The Argentine added: “I am aware of the age I have but I hope I have several years left to keep enjoying my football and doing this.”

Sadio Mane, another of the stars of the Liverpool side that won the Champions League, came fourth in the ranking for the prize voted for by 180 journalists from around the world.

Messi has scored 46 goals in 54 matches so far in 2019, and netted 36 times in total in 34 La Liga matches last season as Barcelona won the Spanish crown.