Move on to submit manipulated report on Khaleda’s health: BNP 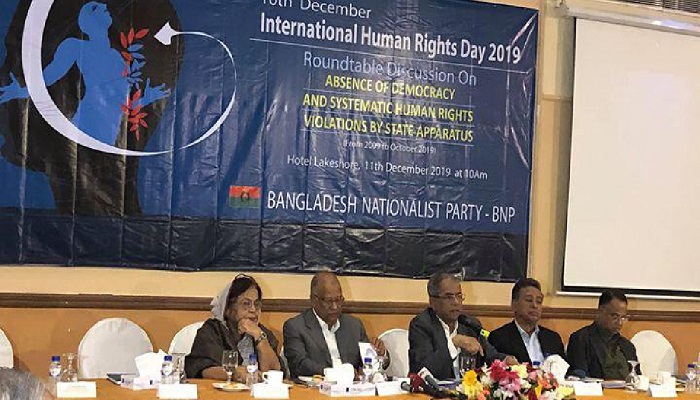 BNP on Wednesday alleged that the government is trying to submit a different report on Khaleda Zia’s health condition before the Supreme Court changing the one made by Bangabandhu Sheikh Mujib Medical University authorities.
“The medical board’s report sought by the court is yet to come. We came to know that steps are being taken to submit a different report (before the court on Khaleda’s health) by removing the report the BSMMU authorities have already prepared,” said BNP secretary general Mirza Fakhrul Islam Alamgir.

He came up with the remarks while speaking at a seminar arranged by BNP at a city hotel on the country’s human right situation, marking the International Human Rights Day.  Diplomats from 15 countries, including the USA, the UK, India, Pakistan, Russia and the European Union, were present at the programme.The BNP leader said the government is working very carefully to unfairly prolong their party Chairperson Khaleda Zia’s stay in jail. “They’re violating human rights by doing so.”

The court also asked the medical board, formed by the Bangabandhu Sheikh Mujib Medical University (BSMMU) to treat Khaleda Zia, to submit a report on her health condition within December 12. The board failed to present the report on December 5 as per the directive given on November 28.

Khaleda has been in jail after being convicted in the Zia Orphanage Trust corruption case on February 8, 2018. She was found guilty in another corruption case later the same year, though her party claims both cases are politically motivated. The BNP chief has been receiving treatment at the BSMMU since April 1 this year.

Fakhrul said the BSMMU medical board in its report on November 30 said Khaleda has been at a ‘crippling stage’ and she needs much better treatment. “The Supreme Court asked the authorities to submit this report, but it’s yet to be presented.”

He alleged that Khaleda Zia has been kept in in jail ‘unlawfully’ for nearly 20 months in false cases while she has long been denied bail.The BNP leader said other people convicted in such cases are freed on bail, but Khaleda has not been granted that due to various ‘obstructions’ by the government.