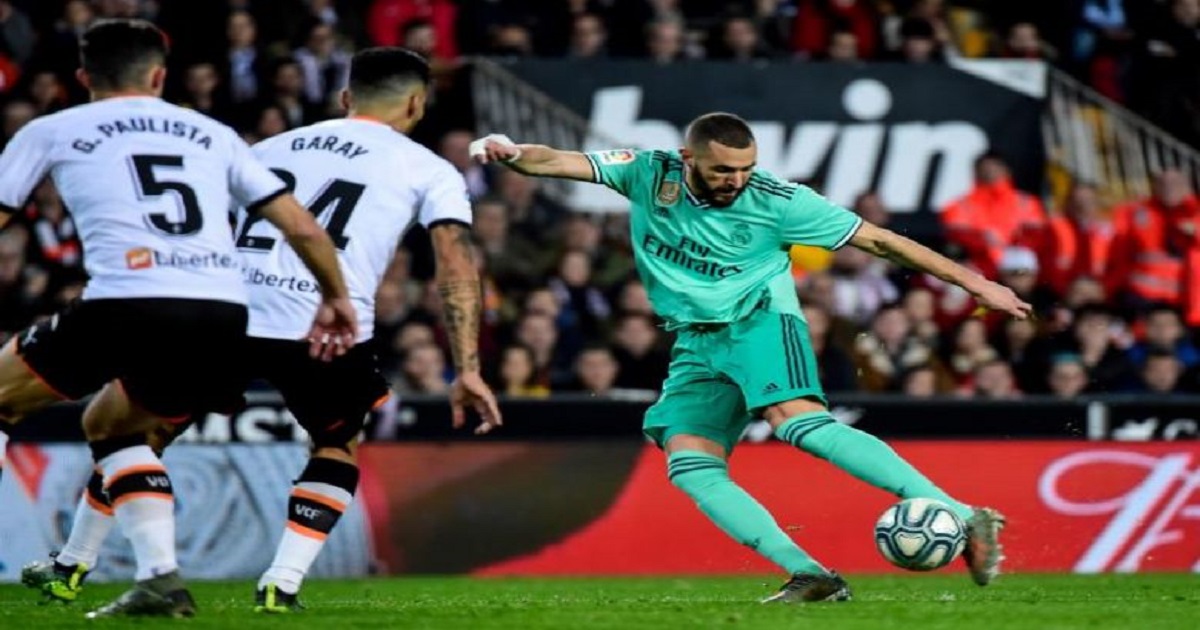 With Real Madrid facing defeat three days before its “clásico” at Barcelona, goalkeeper Thibaut Courtois came to the rescue against Valencia — at the other end of the field.

The Belgium goalkeeper abandoned his own goal and joined teammates for a corner kick Madrid had earned five minutes into stoppage time while trailing by a goal at Valencia’s Mestalla Stadium on Sunday.

The towering Courtois timed his run perfectly, rising to connect with Toni Kroos’ cross with a powerful header that Valencia goalkeeper Jaume Courtois could only bat down into the crowded area. A back-heeled attempt to clear the ball by Ezequiel Garay put the ball on Karim Benzema’s boot to fire into the top of the net and snatch a 1-1 draw on the game’s last kick.

The draw wasted a chance for Madrid to take the outright lead. Second-place Madrid is level on points with league leader Barcelona before the teams meet at Camp Nou.

“This gives us a small boost, because if you go to Camp Nou after a 1-0 loss, it is worse. Scoring the final minute always lets you end the match feeling good,” he said.

Madrid dominated the first half hour, working several flowing passing combinations to get into firing range.

Valencia held firm thanks to holding midfielder Francis Coquelin until playmaker Dani Parejo shifted the action into a back-and-forth exchange.

Rising talent Ferrán Torres had a great opportunity for the hosts just after halftime on the break, only for Courtois to close in fast and snuff out his attempt.

Madrid coach Zinedine Zidane sent on Gareth Bale and Vinicius Junior with just over 20 minutes left to take advantage of the open space.

But it was Valencia that broke the stalemate when Daniel Wass spotted Carlos Soler on a team break. Soler coolly fired in Wass’ pass after teammates had drawn off the backtracking defenders to take the lead in the 78th.

“I am 2 meters tall and rivals can get nervous if I join the attack,” Courtois said. “I saw the ball coming at my height and I struck it well. You have to join the attack with the conviction that you are going to score.”

Zidane should have holding midfielder Casemiro well rested for Barcelona. He did not play Sunday, being at risk of a fifth yellow card this season and getting suspended.

Villarreal ended Sevilla’s eight-match unbeaten run in the league with a 2-1 away win, leaving the hosts four points behind Barcelona and Madrid.

Sevilla had equalized and was pressing for a second when Villarreal got its second goal against the flow of play.

Moi Gómez responded to Manuel Trigueros’ run behind the defense with a lobbed pass that the midfielder controlled with his back to the net. Trigueros then stayed calm as goalkeeper Tomas Vaclik rushed off his line before passing for the unmarked Toko Ekambi to get the 74th-minute winner.

Munir El Haddadi had canceled out Raúl Albiol’s header for Villarreal when the Sevilla forward rifled in a cross from Sergio Reguilón in the 61st.

The win was Villarreal’s first in seven rounds.

Getafe got goals from Ángel Rodríguez and Marc Cucurella to beat Valladolid 2-0 and move past Atlético Madrid into fourth place.

After only one win in its first seven games, José Bordalás has got Getafe back to its good form from last season. The modest Madrid-based club is in contention for a Champions League berth after seven wins, two draws and one loss in its last 10 games.

Last-place Espanyol remained without a victory at its stadium in nine games after a 2-2 draw against Real Betis.

Despite remaining five points from safety, Espanyol coach Pablo Machín was pleased by his team’s fightback from an early deficit to take a 2-1 lead before conceding a second goal to Betis’ Marc Bartra.

“The point has more value than just a number. Today’s match shows us the way forward,” Machín said.

The point allowed promoted Mallorca to stay just above Celta, which is in the drop zone.

2019-12-16
Mr. Admin
Previous: Taylor Swift to headline UK’s Glastonbury Festival
Next: Are you taking care of these body parts?