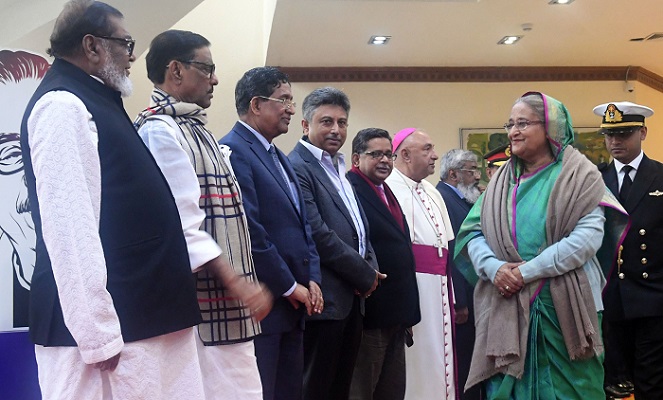 Bangladesh Ambassador to the UAE Muhammad Imran received the prime minister at the airport.After the reception at the airport, a ceremonial motorcade escorted her to Shangri-La Hotel in Abu Dhabi, where she will be staying during the visit.

Besides, the cabinet secretary, the chiefs of the three services, the PM’s principal secretary, the dean of the diplomatic corps and high civil and military officials were present.

On Monday, the prime minister is expected to attend the “Abu Dhabi Sustainable Week” and “Zayed Sustainable Awards Ceremony” at the ICC Hall of the Abu Dhabi National Exhibition Centre (ADNEC) in the morning.

In the afternoon, she will attend an interview session on “The Critical Role of Women in Delivering Climate Action” at Hall-11, the ADNEC.

The premier will return home on Tuesday night Bangladesh time.

Meanwhile, Foreign Minister Dr AK Abdul Momen has said Prime Minister Sheikh Hasina will highlight Dhaka’s position in implementing SDGs during her visit to the UAE where she is also set to give directives to Bangladesh envoys in West Asia regarding current Middle East situation.

“During the visit, the prime minister will get opportunities to apprise the world leaders of the initiatives taken by Bangladesh in achieving the Sustainable Development Goals (SDGs),” he told a press briefing at the Foreign Ministry in Dhaka.

Momen said the prime minister will give an overview to the participating world leaders of Bangladesh government’s initiatives in the field of energy, health care, climate change, water and biotechnology to achieve “Vision 2041” to turn Bangladesh into a developed country.

During the visit, he said, two instruments are likely to be signed between Bangladesh and the UAE.

The instruments are “The Addendum to the MoU signed between Emirates National Oil Company (ENOC) and Ministry of Power, Energy and Mineral Resources, Bangladesh” and “The Protocol of Amendment to the Agreement on Allotment of Land Plot in Baridhara Diplomatic Enclave in Dhaka for Construction of Embassy Premises”.

The foreign minister said the premier is scheduled to join an envoys’ conference to be attended by Bangladesh Ambassadors to Bahrain, Iran, Iraq, Kuwait, Lebanon, Oman, Qatar, Saudi Arab and the UAE.

At the conference, Momen said, the prime minister will give directives to the Bangladesh envoys about Dhaka’s role amid the current tensed situation in the Middle East.

The premier is also likely to give directives to the Bangladeshi envoys on how they can attract more investment in Bangladesh from the Middle Eastern nations, he said.