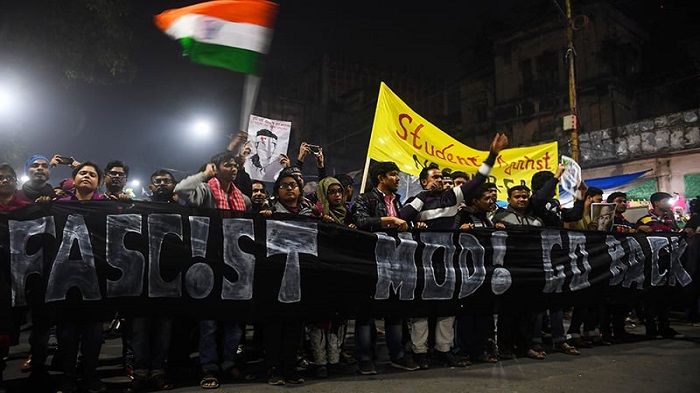 Embol­dened by their own growing strengths and a deepening political resistance, protesters against a controversial citizenship law on Saturday demanded Prime Minister Narendra Modi’s college and birth certificates to begin with.
As the main opposition Congress party resolved on Saturday to formally throw its lot against the Citizenship Amendment Act and the proposed National Register for Citizens, writer Arundhati Roy waded into the crowd of protesting women at the Jamia Milia university.

She said there was no going back as the day was nigh when the protests would succeed in turning the tables on the Modi government. “The time is approaching, when we will be enjoying azadi and the rulers would be in detention centres,” she said in a striking resemblance to a Faiz Ahmed Faiz verse that has courted controversy from the Hindutva establishment.With the Citizenship Amendment Act coming into effect on January 10, filmmaker Anurag Kashyap raised his voice in protest to find an elusive answer from Mr Modi directly.

Going on Twitter, Mr Kashyap launched a direct attack on Mr Modi tweeting in Hindi, he demanded proof that Mr Modi was educated, and wanted to see his degree in “entire political science.” The government has gone all out to protect the secrecy of the degree, which Mr Modi says he earned during the emergency from Delhi university, but there is no evidence of who his classmates or teachers were.

Mr Kashyap also said that Mr Modi should show his birth certificate, along with that of his father and his entire family, to the nation, and only then could he ask for papers from citizens.

The filmmaker has been vocal against the CAA ever since it was passed by Parliament on December 11.