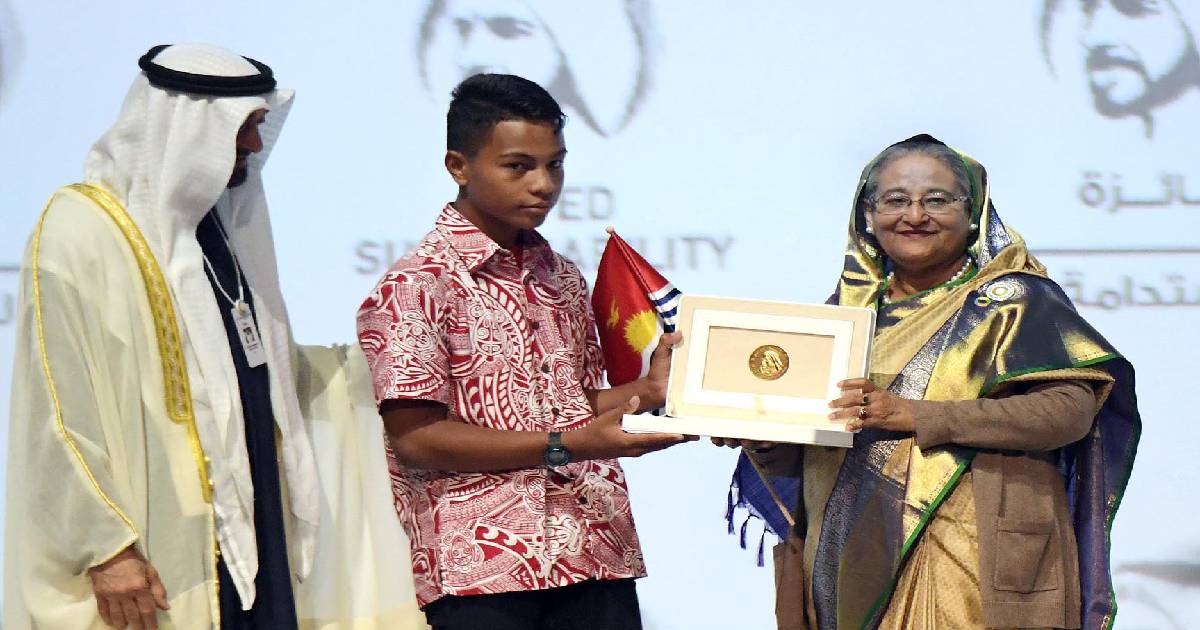 The Abu Dhabi Sustainability Week 2020 was formally opened at the ICC Hall of Abu Dhabi National Exhibition at 11am (local time).

On her arrival at the venue, the Prime Minister was received by Crown Prince of Abu Dhabi and Deputy Supreme Commander of the UAE Armed Forces Sheikh Mohammed bin Zayed Al Nahyan.

Sheikh Hasina exchanged pleasantries with Sheikh Mohammed bin Zayed Al Nahyan and the heads of the states and the governments.

This year, Zayed Sustainability Prize was conferred upon 10 organisations and institutes of different countries under five categories.

At the function, Sheikh Mohamed bin Zayed bin Sultan Al-Nahyan and Sheikh Hasina along with seven other heads of state and government handed over the prizes to the winners.

Sheikh Hasina handed over the prize to the representative of Eutan Tarawa Ieta Junior Secondary School of Kiribati as it won the prestigious prize under the Global High School category.

Under the four other categories, GLOBHE from Sweden won the prize in health, while Okuafo Foundation from Ghana in the food, Electricians without Borders from France in the energy and Ceres Imaging from the USA in water categories.

The Abu Dhabi Sustainability Week (ADSW) brings together a unique fusion of policymakers, industry specialists, technology pioneers and the next generation of sustainability leaders.

Cutting across these pillars and all programmes throughout ADSW 2020 is the theme of Artificial Intelligence, Community and Youth.

The agenda of the ADSW 2020 are aligned with the UN Sustainable Development Goals (SDGs) and the UAE Vision 2021.

The Abu Dhabi Sustainability Week is a global platform for accelerating the world’s sustainable development.

Since its inception in 2008, the ADSW has turned into one of the world’s largest sustainability gatherings, attracting a unique mix of policymakers, industry experts, technology pioneers and the next generation of sustainability leaders.

In the evening, the Prime Minister will join the Envoys’ Conference to be arranged at her palace of residence with the participation of Bangladeshi envoys posted in Middle East countries.

On Tuesday, the Prime Minister is likely to have separate meetings with UAE Prime Minister and Ruler of Dubai Sheikh Mohammed bin Rashid Al Maktoum; Crown Prince of Abu Dhabi and Deputy Supreme Commander of the UAE Armed Forces Sheikh Mohammed bin Zayed Al Nahyan; and Mother of the Nation and Chairwoman of the Supreme Council for Motherhood and Childhood Sheikha Fatima bint Mubarak.

On Tuesday afternoon, Sheikh Hasina will leave for home wrapping up her UAE visit.

2020-01-13
Mr. Admin
Previous: 3rd SUST IPE Alumni Association (SIPEAA) Election will be held on January 24th
Next: Mayor presents budget to protect the most vulnerable and invest in frontline services