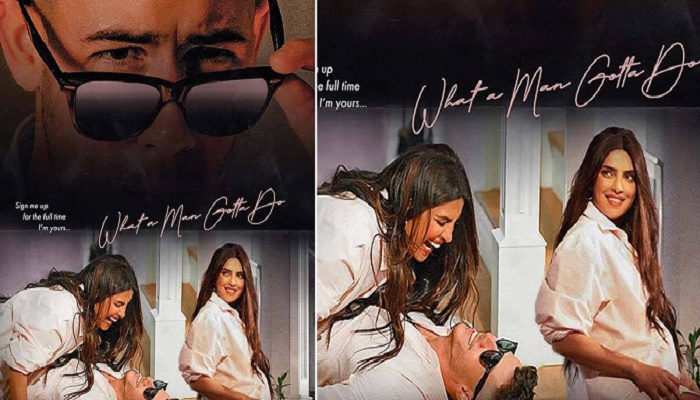 The Jonas Brothers have been sharing posters of their upcoming single “What a Man Gotta Do” which releases on January 17.
The latest poster shared by Nick Jonas features him and wife Priyanka Chopra. The two are seen recreating the poster of 1983 film Risky Business.

Nick captioned the poster, “She’s Risky and I’m the Business #WhatAManGottaDoVideo.”Earlier, Kevin Jonas also shared a poster of “What a Man Gotta Do” which had him recreating the poster of 1989 rom-com Say Anything… with wife Danielle Jonas.”

Now, it remains to be seen which iconic film will Joe Jonas and Sophie Turner recreate for the upcoming single.

Jonas Brothers got back together in 2019 with their track “Sucker”. They released their album ‘Happiness Begins’ and also starred in Chasing Happiness, a documentary on Amazon Prime Video which narrated their story from their growing up days in New Jersey to the reunion of their band and launch of their new album after ten years.