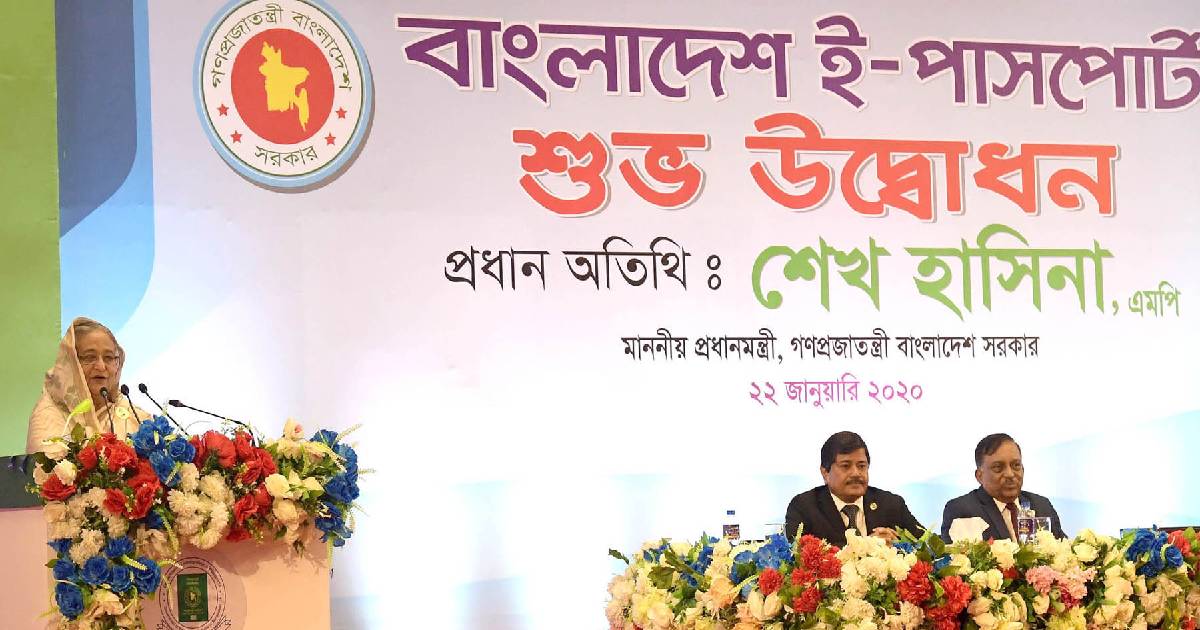 The introduction of e-Passport will brighten the image of Bangladesh further in the digital world, Prime Minister Sheikh Hasina said on Wednesday.

“We can provide e-Passports to people in the special year of the birth centenary celebration of the Father of the Nation, which, I believe, will undoubtedly brighten the image of Bangladesh further in the digital world,” she said.

The Prime Minister said this while inaugurating the e-Passport (electronic passport) services at the Bangabandhu International Conference Centre (BICC) in the city.

With the formal opening, Bangladesh entered e-Passport era as the first country in South Asia.

At the function, the Prime Minister received her e-Passport. Home Minister Asaduzzman Khan handed it over to her.

Sheikh Hasina said Bangladesh has advanced one more step in the digital era with undertaking the e-Passport project.

Noting that 118 countries have already introduced e-Passport, she said: “Bangladesh is the first country in South Asia and 119th country in the world to introduce e-Passport.”

Sheikh Hasina said the goal is to make passport and immigration services time-befitting, keeping pace with the developed world.

She said it is heard that when expatriates return home, they are subjected to various types of harassment. “People returning home and going abroad won’t be subjected to harassment in the future,” she said.

Noting that the people of the country has achieved financial solvency with the progress of the country’s economy, she said now a large number of people go abroad and expatriates are making a significant contribution to the economy by sending remittances to home.

“So, we’re paying attention so that they (expatriates) would be subjected to any type of harassment,” said Sheikh Hasina.

“The government has reached the passport, visa and immigration services to the doorstep of people through 69 passport offices in 64 districts and 33 immigration check-posts of the country, and the passport and visa wings of 75 Bangladesh missions stationed in foreign lands,” she said.

In the past, there was a problem of complete fake passports (golakata passport) in the country, she said adding that the problem will never occur.

Hasina said people will not fall victim to deception as they (having e-Passport) will easily be able to complete immigration through e-Gates in transparent way.

Mentioning that Bangladesh Awami League in its 2008 election manifesto announced to build the country as Digital Bangladesh, she said the country has witnessed a digital revolution and the government has been able to reach internet services almost throughout the country.

The Prime Minister said her government’s goal is to take Bangladesh to a dignified position and it has relentlessly been working to this end.

She congratulated people as they are getting e-Passport with latest technology in the Mujib Year (2020-2021).

Hasina also expressed her gratitude to people as they kept their trust in her government and gave scope to serve them by extending their mandate to her party.

The e-Passport and automated border control management project involving the cost of Tk 4,569 crore is being implemented by the DIP and German company Veridos GmbH with assistance from the Bangladesh Army under the Security Services Division of the Home Ministry.

The e-Passport is now initially being issued from three offices – Uttara, Jatrabari and Agargaon –of the Department of Immigration and Passports in Dhaka. These offices have the capacity to issue 25,000 passports a day.

A total of 30 million e-Passports will be delivered in 10 years under the project.

The DIP and Germany Veridos signed an agreement on July 19, 2018 for issuance of electronic passports alongside machine-readable ones.