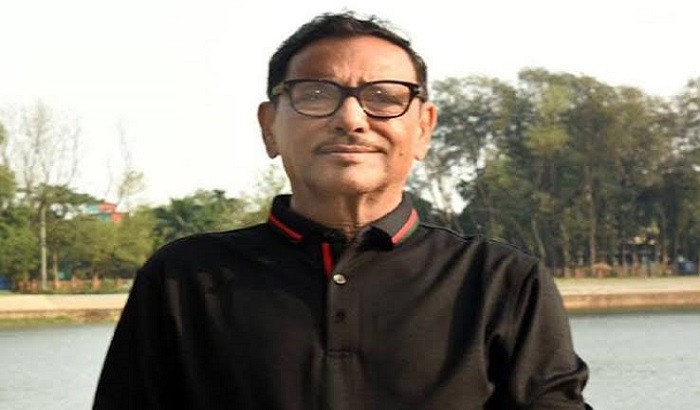 The condition of Awami League (AL) general secretary Obaidul Quader, now undergoing treatment at Bangabandhu Sheikh Mujib Medical University (BSMMU), is stable, said vice chancellor (VC) of the university Professor Kanak Kanti Barua on Friday.
The VC of BSMMU came up with the development while talking to reporters at the hospital at around 12:00 pm.

Earlier in the morning, road transport and bridges minister Obaidul Quader was admitted to the BSMMU as he suddenly fell ill at AL president Sheikh Hasina’s political office in the city’s Dhanmondi area.Publicity and publication secretary of the ruling party Abdus Sobhan Golap confirmed this to media at around 11:00 am.

Abdus Sobhan Golap said, “Obaidul Quader reached the AL president’s political office at 10:00 am as a party secretary-level meeting was scheduled to be held on Friday morning.”

“He (Obaidul Quader) started to feel sick after his arrival at the party office. Later, he was sent to the Bangabandhu Sheikh Mujib Medical University (BSMMU) for treatment,” the AL publicity and publication secretary added.

Quader was kept under observation at Coronary Care Unit (CCU) of the BSMMU after he had breathing complications, Abu Naser, deputy information officer of the minister said.

“Doctors have completed his check-up and all the test reports including blood pressure are good.” Naser told media.

On May 15 last year, the minister returned home after receiving medical treatment in Singapore for over two months.He had been admitted to BSMMU hospital initially on March 3 following breathing complications. Tests revealed three blockages in his coronary artery. He was then flown to Singapore the next day for treatment.

Govt restricts movement outside after 6pm