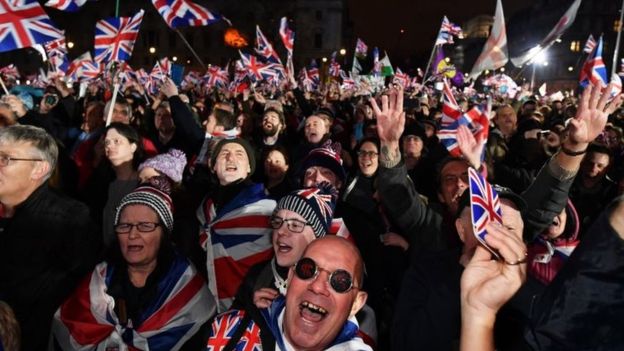 The UK has officially left the European Union after 47 years of membership – and more than three years after it voted to do so in a referendum.
The historic moment, which happened at 23:00 GMT, was marked by both celebrations and anti-Brexit protests.

Candlelit vigils were held in Scotland, which voted to stay in the EU, while Brexiteers partied in London’s Parliament Square.Boris Johnson has vowed to bring the country together and “take us forward”.

In a message released on social media an hour before the UK’s departure, the prime minister said: “For many people this is an astonishing moment of hope, a moment they thought would never come.

“And there are many of course who feel a sense of anxiety and loss.

“And then of course there is a third group – perhaps the biggest – who had started to worry that the whole political wrangle would never come to an end.

“I understand all those feelings and our job as the government – my job – is to bring this country together now and take us forward.”

He said that “for all its strengths and for all its admirable qualities, the EU has evolved over 50 years in a direction that no longer suits this country”.”The most important thing to say tonight is that this is not an end but a beginning,” he said, and “a moment of real national renewal and change”.

How did the UK mark the moment?

Brexit parties were held in pubs and social clubs across the UK as the country counted down to its official departure.

The Brexit Party leader said: “Let us celebrate tonight as we have never done before.

“This is the greatest moment in the modern history of our great nation.”

Pro-EU demonstrators earlier staged a march in Whitehall to bid a “fond farewell” to the union – and anti-Brexit rallies and candlelit vigils were held in Scotland.

Other symbolic moments on a day of mixed emotions included:

In Northern Ireland, the campaign group Border Communities Against Brexit staged a series of protests in Armagh, near to the border with the Irish Republic.

At 2300 GMT, Scotland’s First Minister Nicola Sturgeon tweeted a picture of the EU flag, adding: “Scotland will return to the heart of Europe as an independent country – #LeaveALightOnForScotland”