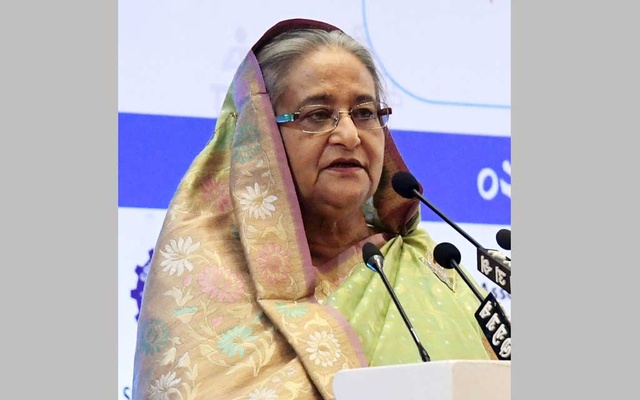 Prime Minister Sheikh Hasina on Sunday said her government has been tirelessly working to transform the country’s population into efficient workforce to cope-up with new technologies and innovations at the advent of the Fourth Industrial Revolution (IR).
“The fourth industrial revolution will approach soon, so we need to develop competent human resources to make them well-suited for that,” she said while opening the 23rd national convention of the IDEB.

The premier added that her government by now has taken initiatives to face the challenge of building skilled workforce in view of the fast changing global scenario with the advent of the newer technologies.IDEB is hosting simultaneously a 3-day international conference on the “Skills Readiness for Achieving SDGs and Adopting IR 4.0” to mark their convention at Bangabandhu International Conference Centre (BICC) in the capital.

The prime minister said the government has attached top most priority to science, technology, technical and vocational education to turn the people into skilled human resources. “Efficient human resources are the most important element to build an economically advanced country,” she added.

In this context, the prime minister said, “We want to equip our people with the latest technical and technology based education and training so that they can cope with the changing world.”

Sheikh Hasina said, “Efficient workforce can contribute to the development sectors of our country as well as we can send them to overseas job market as huge number of Bangladeshi workers is working in different countries across the world.”

“We want to send efficient workforce to the foreign countries,” she opined.

At the outset of the programme, a one minute silence was observed as a mark of profound respect to the memories of Father of the Nation Bangabandhu Sheikh Mujibur Rahman and other martyrs of the August 15, 1975 carnage, the four national leaders, martyrs of the Liberation War of 1971 and Language Movement of 1952.