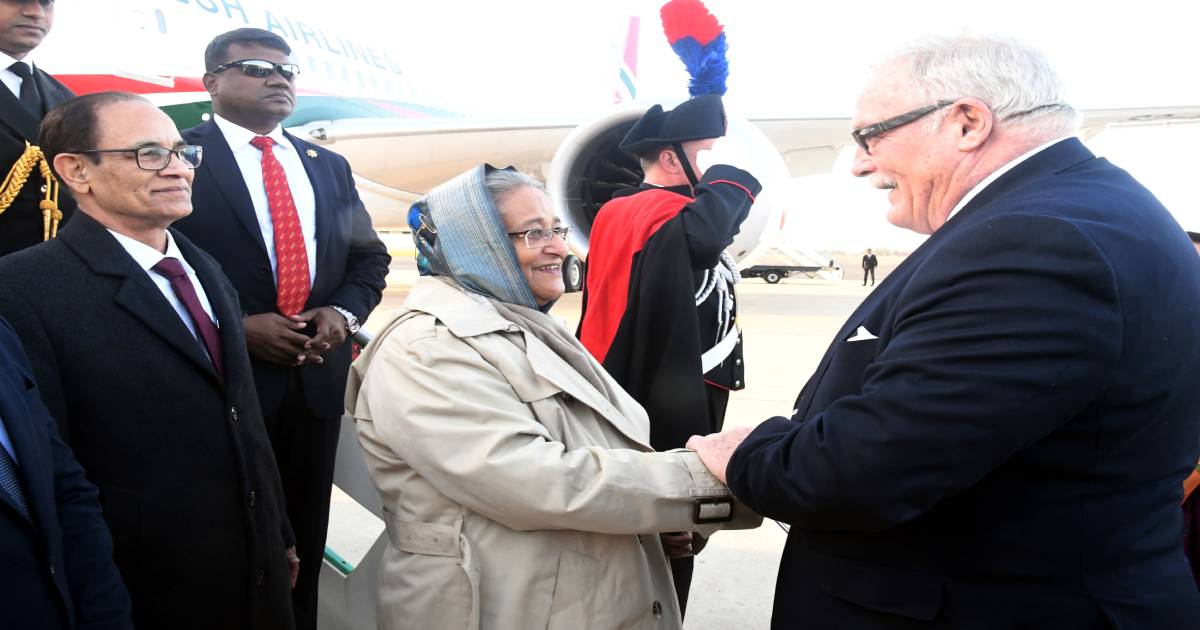 Prime Minister Sheikh Hasina arrived in Rome on Tuesday on a four-day bilateral visit to Italy to hold talks with her Italian counterpart Giuseppe Conte.

A VVIP flight of Biman Bangladesh Airlines carrying the Prime Minister and her entourage, which departed from Hazrat Shahjalal International Airport in Dhaka at 9:45am (Bangladesh time), landed at Fiumicino Airport, Rome around 4:30pm (Italian time).

During her stay in Italy, the Prime Minister will attend a community event at Parco dei Principi Grand Hotel & SPA on Tuesday evening.

On Wednesday (February 5), she will inaugurate the Chancery Building of Bangladesh Embassy at Via Dell’Antartide in Rome.

After that, Sheikh Hasina will hold her bilateral talks with Italian Prime Minister Giuseppe Conte at Palazzo Chigi and join the official lunch.

There are three proposals on bilateral instruments between Bangladesh and Italy. These draft agreements are on cultural exchange, political consultations and cooperation in the diplomatic field, said Foreign Minister Dr AK Abdul Momen while briefing reporters on Sunday last.

He said a joint statement will be issued after the bilateral meeting between the two Prime Ministers. “If it’s not possible to sign the proposed agreements during the visit, those will be reflected on the joint statement, and the instruments will be signed afterwards,” said the Foreign Minister.

In the evening, she will attend dinner to be hosted by the Bangladesh Ambassador in honour of her at Parco dei Principi Grand Hotel & SPA.

On Thursday (February 6), Pope Francis will give audience to Sheikh Hasina in Rome before her departure for Milan.

On Friday (February 7), she will leave Milan for Dhaka by Emirates Airlines from Milan Malpensa International Airport at 1:40pm (Italy time).

Bangladesh Ambassador to Italy Abdus Sobhan Sikder will see the Prime Minister off at the airport.

She will reach Hazrat Shahjalal International Airport (HSIA) at 8am on February 8.