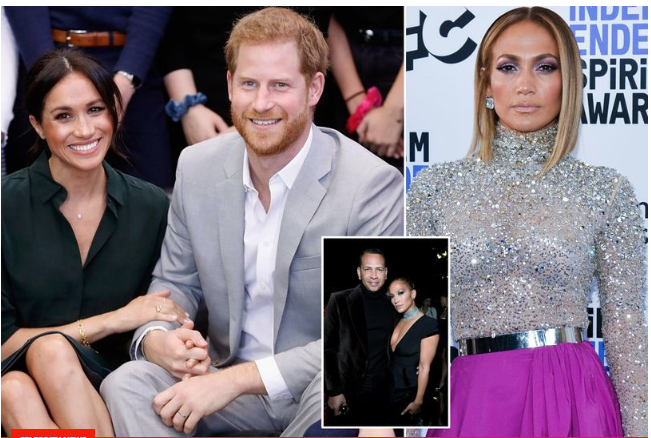 Prince Harry and Meghan Markle continued their courtship of American A-listers by dining with Jennifer Lopez and her baseball star boyfriend.
The Duke and Duchess of Sussex bonded with the pop queen at Wall Street bank JP Morgan’s Miami billionaire’s summit – reportedly their first paid engagement since stepping down from royal duties.

Harry told high-rollers about his struggle to come to terms with his mother Princess Diana’s death and revealed he had been in therapy for the past three years.After stepping off stage, the couple joined JLo, 50, and Rodriguez, 44 – known in the US as A-Rod – for dinner at Habitat, a restaurant at 1Hotel South Beach where the summit was held

One source said: “Harry and Meghan got on really well with Jennifer and Alex. JLo was overheard inviting the couple and their baby Archie to her and Alex’s house in Miami to spend time with them and their kids.”

Details of the dinner date came as controversy grew around their decision to reportedly take money from a bank with such a dubious record.

It built its business on banks that profited from the slave trade and its financial wrongdoings have resulted in billions in fines.Four years ago the bank handed £500,000 to the Remain campaign while in 2016, Chairman Jamie Dimon warned of an EU trade war if Brexit went ahead.

Dimon, whose fortune is estimated at £800million, said it would “result in years of uncertainty”.

The Sussexes were flown from Vancouver, Canada, to the Palm Beach event on JP Morgan’s £50million Gulfstream 6, described as the “biggest, fastest and overall best private jet money can buy”.

The move raised questions about their carbon footprint. An economy flight alone would pump out 13.65 tons of carbon.

The Queen has reportedly requested they attend the annual Commonwealth Ser-vice at Westminster Abbey on March 9.

They are expected to include it in a tour marking their final duties as senior royals.

Buckingham Palace and JP Morgan both declined to comment.